The Holidays Come to an End in Puerto Vallarta, Mexico.

The "longer stay" mind set is most certainly different!  Instead of planning the excursions that you want to do before leaving a location, we sat back and just let the days continue to flow one into the other.

So when the rain continued day in and day out, sometimes without a break at all, we just sat back and stayed at home.  We felt awful though for those here on a short vacation that didn't have that luxury. How peeved I would have been if I'd saved up for a great time in the sun and surf and water excursions only to have it rain, sometimes extremely hard, with constant cloud cover and chilly for here every day for a week!

Last Sunday, we met up with Cindy & Bert Ramirez, for breakfast at La Palapa on the beach. Cindy & Bert are good friends of Heather Austring that we met in San Juan del Sol, Nicaragua. And Heather had been introduced to us by good friends in Salinas, Ecuador. Our world gets smaller and smaller. And everyone knows someone else in another part of the world where we've been or where we're going.

Breakfast was delicious and a good value for such a higher tier restaurant. It was a great setting to get to know new friends!  It rained on and off but we were sitting inside rather than on the sand under umbrellas.

Afterwards we continued our conversation upstairs in their apartment. A wonderful 2 br/2 ba with a balcony and ocean views. They had completely remodeled the unit and it's homey and comfortable. We had a wonderful time and hung out until it was time to move on to Nacho Daddy for the last Sunday of football.

Monday was spent totally at home because of hard rain all day!  We read, we did research, we caught up on Dexter via Netflix ...we were lazy!!

Tuesday, New Year's Eve, was pretty ugly too but at least the rain was holding off. So we actually did get out and viewed a couple of apartments close by in the morning. And because we were going out late, we went back home and worked on the Internet. But, in general, kept it low key.

About 5pm we decided to walk up the hill to Casa Isabelle for happy hour. Unfortunately, there was no happy hour and they were busy getting everything set up for the New Year's Eve dinner crowd. They served us drinks anyway but didn't seem too thrilled we were there. And then another couple came in wanting happy hour too.  Lol 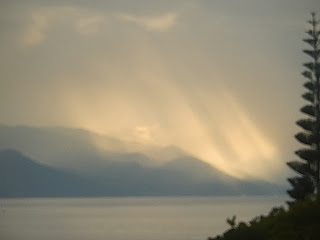 The view from the bar with beautiful sunlight streaming through a hole in the clouds. 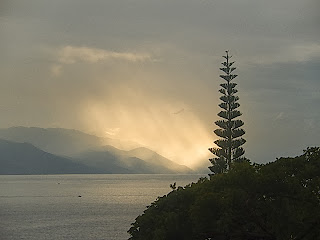 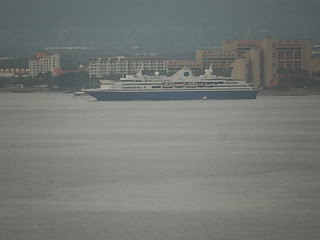 A cruise ship leaving port on New Year's Eve.
A light salad dinner and Mike and I decided to take a nap before needing to be at the marina by 9:30pm for the New Year's Eve sail cruise out in the Bay of Banderas to watch the fireworks up and down the coast. The rain was still holding off but it still didn't look great!  We had been assured that there was coverage on the boat in case it rained. Hahaha!

Off we want by cab to the marina and met up with our shipmates. A few were way over dressed or under dressed, as it turned out, and I knew they were going to be miserable.  As we all boarded, taking our shoes, before getting on board, a light mist started to fall. I was thrilled I had worn long zip off rain repellent pants along with a light weight long sleeved hoody. PLUS, I wore the beautiful hand woven scarf/shawl I purchased in Cusco, Peru!  Yeah, I was right!!

The rain began to come down even before we made it out of the harbor! And, then it began to pour.  We were all drenched before they could get out the rain coats or even think about putting up the overhead tarp!!  Drinks got a little watered down and food was served in shifts down below under deck. I felt bad for the crew and for all of us.

We were very close to heading back in to port with the intention of asking for refunds or free excursions when the rain took a break. We were able to get close to the Malecón in time for the fireworks. And we weren't disappointed!  Beautiful booms with gorgeous displays of all colors and shapes up and down the coast of the bay. 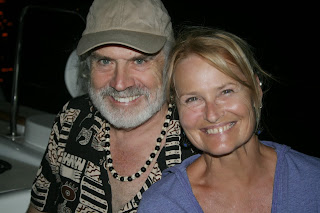 Us BEFORE the rains came.  Should have seen us after!! lol  Too rainy to take pictures. Had to keep the cameras in the bag in the cabin. 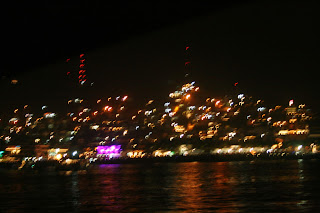 The Malecón of PV and the city lights. 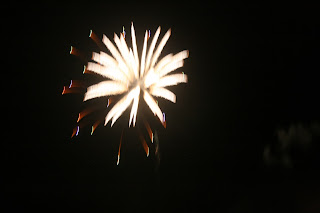 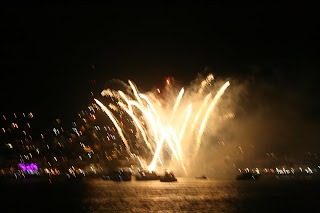 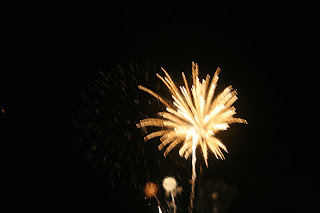 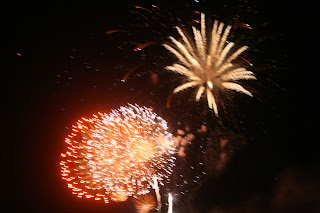 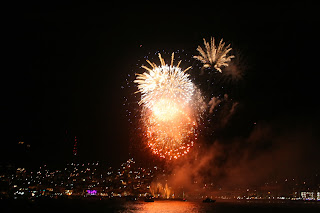 The rain started up again. It definitely put a real damper on what is usually a very festive evening. The food was great dispute the rain. Wonderful appetizers and then filet mignon with baked potato and steamed vegetables. Again, we had to eat in shifts so there really was very little socializing. Everyone was trying to stay as dry as possible and it was hard to have a conversation. Oh well, cei la vi!  Despite it all, at midnight, Mike and I toasted in the New Year and a special toast for us and our 13th wedding anniversary. Love ya, babes!!

New Year's Day was still a funky dreary day but we made the most of it because it wasn't raining. We watched the Rose Parade and had a nice breakfast at home. The afternoon was spent walking through town and just enjoying being out and about.

I was craving Italian food, so we walked all over trying to find someone who had lasagna. Many places were closed and town seemed quiet. We finally found a place right off the beach on the sidewalk by the park, La Gran Plaza. The best part was that it had lasagna as a special, dollar beers, and a great guitarist playing wonderful music right next to us on the boardwalk.  A fabulous anniversary!

Thursday finally dawned with sun just as predicted!  No way were we going to stick around home. So after our morning routine, we headed into town to meet up with an agent to look at another apartment. There were 2 in the same building and they are unfurnished but nicely appointed. We decided that we really don't want to buy furniture again and deal with that hassle at the moment. Never say never but certainly not now. That is, of course, unless the rent would be cut drastically to make it worth our while.

Back for lunch at home but then out again to meet up with another agent to see 2 other places. One is very close to where we are now but in a better location. I fell in love with the unit and building. It's only 12 units, so quite cozy, has a brand new redone pool that gets sun and is heated for the "winter" months, as it can get chilly at night cooling off the water.

The apartment is beautifully decorated in quality Mexican style and is spacious. The kitchen, dining area, and, terrace are all outside with the kitchen and dining being under roof. Love it!  And, the price is right!  Location is good with a decent but not spectacular view of the ocean. But you would get the sunsets for most of the year. It's now the benchmark for anything else we look at.

From there we went into the center of town to see a penthouse with beautiful views of the bay but no pool. Unfortunately, the owner had put on a new deadbolt and hadn't told the agent. She was so frustrated!  We told her, if anyone understands, we do. So after trying to get keys for about a half hour, we told her to forget it. Even though the rent would only be $6oo a month, we decided it was a no go because of location and the condition of the building.

Since we were downtown, we decided to walk back via the Malecón to enjoy it by day. And to enjoy the glorious sun and warmth!  I had been looking for a nice simple and light sterling silver bracelet that I could wear all the time. We walked in and out of shops and the only thing purchased was a beer sock for Mike. Priorities! 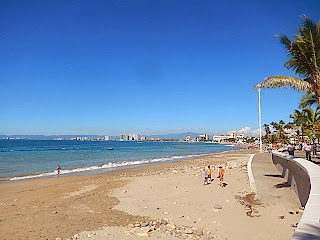 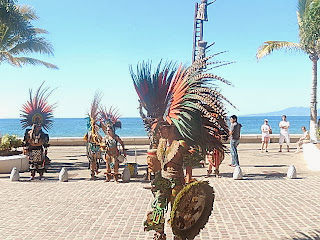 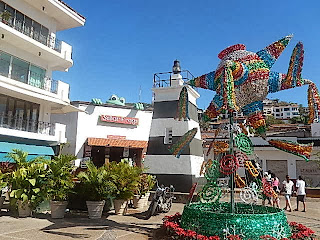 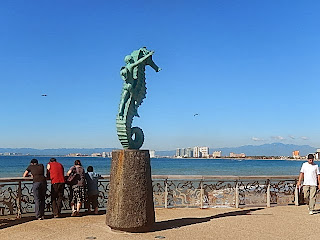 One of the many statues all along the Malecón. 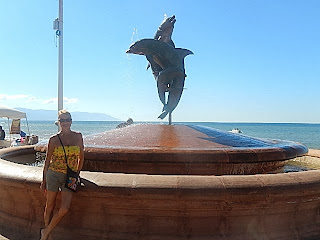 This is a beautiful fountain!


However, as we approached the bridge over the Rio Cuale, I stopped to look at a street vendors jewelry. Amazing how much they have buried in those briefcases!  Alas, I found my new bracelet and we accomplished buying it for almost half of what the original asking price was. I didn't have to work at it very hard though. All I did was keep hesitating. I'm happy, he's happy.

We decided to stop and have a couple of dollar margaritas on the beach at the Sea Monkey. The couple right next to us was the same couple that sat next to us when we were having dinner New Year's Day. We got to talking only to find out that they were from our area of Washington and Sorena was the sister of a colleague of ours back home that we know well. Very, very small world!! They are here for a month, so we'll be seeing more of them. 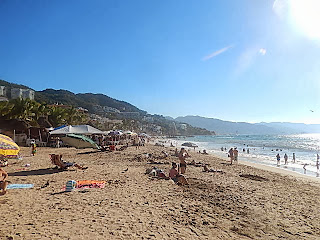 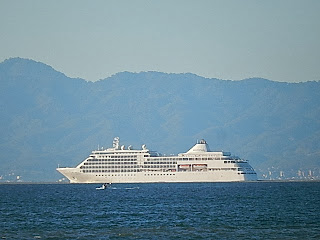 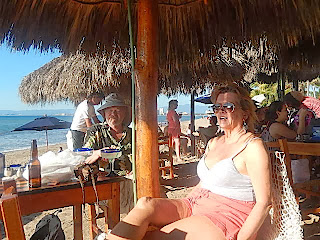 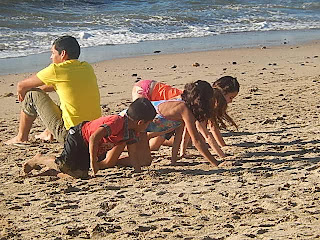 Friday continued to be glorious. As we were making our plans for the day, we received a call from our friend, Joe King Carrasco. He was going up to a beach at Punta Mita, which is at the northern end of the bay, and wanted to know if we wanted to go. Of course, we were going to go!

So after he ran a few errands, we took the bus up to Sam's Club where he would pick us up. A beautiful ride and into an area where we had never been. Joe is a great tour director and knows the area well.

We pulled off the main road onto a dirt drive that lead to a beautiful overlook. With a short walk down a well worn and rain pounded path, we came out to a gorgeous beach that went on forever with only a few luxury hotels and a gold course along the way. So for several hours we walked, played in the surf, and visited until sunset. The dogs had a great time, as well!! 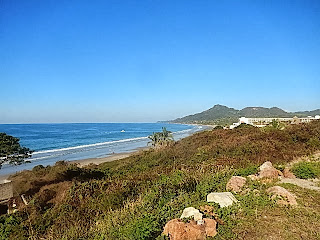 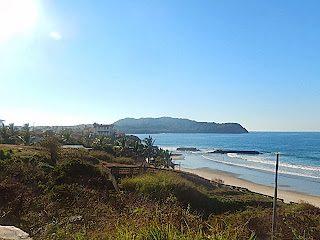 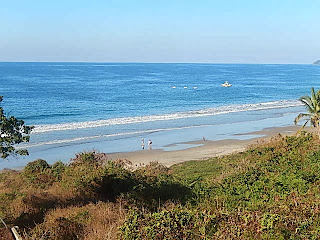 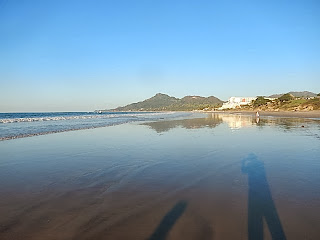 Mike taking pictures of his shadow. 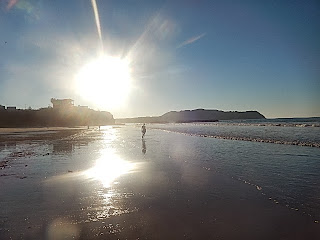 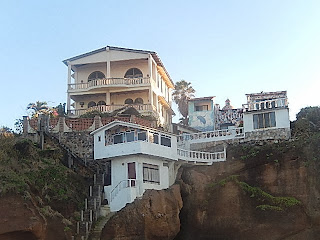 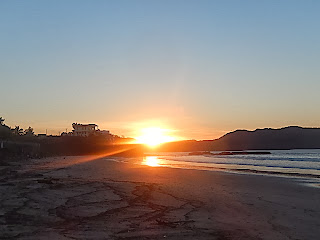 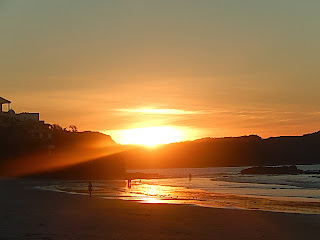 Gorgeous sunset!
Joe wanted to show us Sayulita, which was just a short ride up the road. We'd been there but it was quite a few years ago and was nothing more than a little fishing village. Well, no more!! It's grown into quite the Bohemian town with lots going on. The closest place we've been to that rivaled it was Tamarindo, Costa Rica. A great inexpensive meal, some shopping in a fabulous Mexican wares shop, and then home. Another great day in Mexico!! 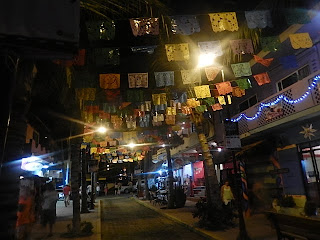 One of the many streets with fun decorations. 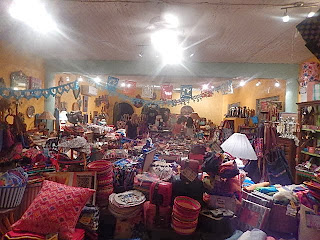 A fabulous shop with handmade Mexican items.  To die for!! 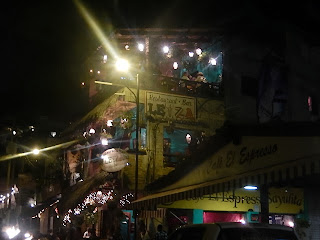 As this is Playoff weekend with games on both Saturday and Sunday, not much else will be happening for us. We did get out yesterday to go down to two Farmer's Markets. Met some wonderful people who live here and felt like we were making inroads into meshing with the community. This is so important if we're going to consider living here.

So Mike's fixing our famous Gorgonzola egg, bacon and croissant breakfast sandwich while I finish up the blog. Time to say that's it for another week in paradise. Stay tuned as we come closer to making a final decision. Once we have our expenses calculated for one full month here for comparison purposes, I think we might be ready. We'll see....

Posted by Tricia Lyman at 1:23 PM
Email ThisBlogThis!Share to TwitterShare to FacebookShare to Pinterest