When I last posted, we were headed back to David to explore the big city.

First we went to PriceSmart (Costco), where it felt like walking into...well, Costco!! LOL  We bought a few essentials that weren't packaged for 2 yrs worth - a bag of Lindor chocolates, a bag of veggie chips, wine (of course), and juice.

We were then dropped off about 5 blocks from the town square and Mike and I began to explore.  I must say, David is NOT a pretty colonial city! It looks old and tired. But, boy, is it bustling!! People everywhere and they were just as friendly as could be. Smiles all around! Everyone here says Buenas Dias to everyone and mean it! 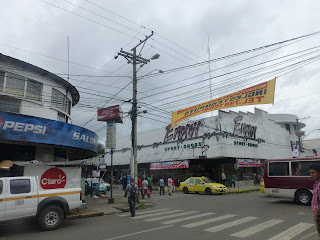 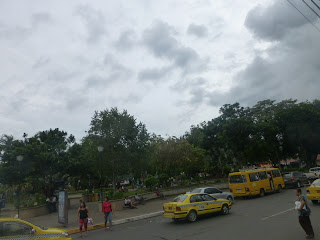 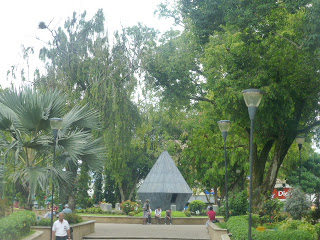 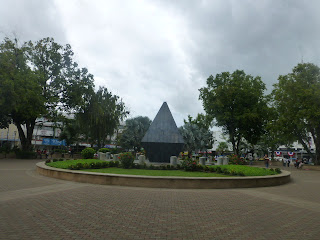 After roaming in and out of stores that all had the same goods and comparing prices, we bought a bottle of water and sat in the square to do some people watching. Yes, we stood out like a sore thumb again - always, here. The best part of David was that it wasn't raining and it was very warm and, of course, humid. That was OK with us!!

All up and down the streets they were lined with little and I mean little stands where they sold lots of "stuff" and the thing we found most interesting was how many were nail or toe nail "salons". More like little huts where they painted your nails or toes really cheap. Didn't quite appeal to me so I didn't give in to the urge.

Walking back to where we were going to meet our hosts, we stumbled upon a beautiful Bohemian art/furniture/decorating gallery. The manager was just delightful and we loved EVERYTHING in the shop!! Funny thing was that the woman is from Boquete and owns a shop there, which we had already been in and LOVED everything there too!! Amazing that we found the same shop in the BIG city.

Walking a little further down the street, we decided to take a load off and stop for a drink at the El Fogon restaurant. Quite nice with a patio and open air restaurant. A beer and a glass of wine cooled us right off and we were ready to walk the last few blocks to the dentist office where our hosts were seeing the dentist again. It's a weekly thing for them right now as they're having some major work done that's extremely reasonable compared to their home country of Canada. And, I must say compared to the US as well.

Instead of staying in David for dinner, we drove back to Boquete and had dinner at Posada, quite a nice place! Great food again for a very reasonable price.

Then came THANKSGIVING!! We had been invited by Rick to join him at Susan & Kerry Frank's home along with many other expats from all over. So at 1:30pm off we went! Their home is not far from town but off a beautiful little gravel road with beautiful views from every direction off their huge veranda.

We met Rosie & Jeff Crofutt, Bill Parke, Arlene & George Erfle and with Susan & Kerry Frank, Rick Bird, and us, it made for 10 happy expats celebrating together!  The food was exquisite!  Since Susan & Kerry's home that they rent from a Panamanian family doesn't have a true oven, another new expat in town, Maria, cooked the dinner and Kerry picked it up at her small rental home.  Maria has started a catering business and will also come to your home and cook. I would recommend her any time!! 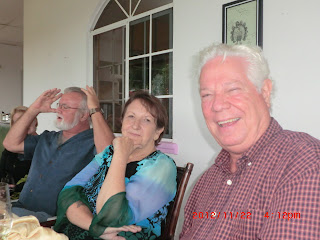 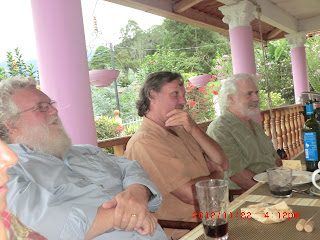 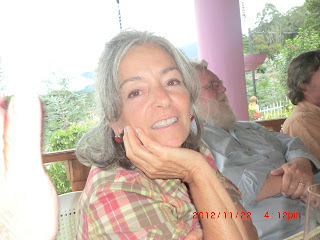 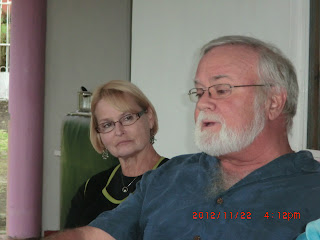 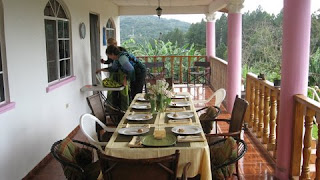 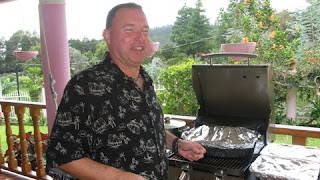 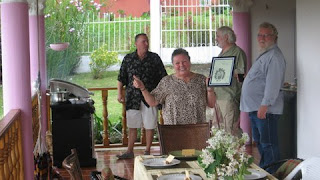 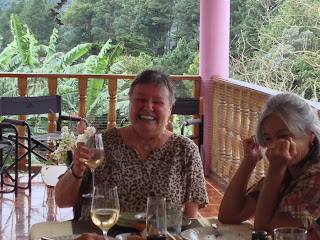 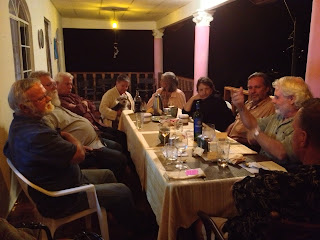 We laughed, we drank, we talked and talked and talked and laughed and laughed and laughed!! Well, maybe all the laughing was because we drank. LOL  Susan & Kerry are from Appleton, Wisconsin; Rosie & Jeff are from Trumbull, CT and grew up and lived around the corner from where I lived in Trumbull, CT at the same time in 1974!!  A very, very small world!!  Rick is from North Carolina/Florida; Arlene & George from Alberta, Canada, and Bill's from Michigan. A GREAT group of folks to spend the holiday with if we had to be away from family!!

Have I mentioned the Bahareque??!! That's the phenomenon known here that causes the mist to come over the mountains when the sun is still shining causing the most exquisite rainbows!! They are everywhere and seem to last forever! Stunning! 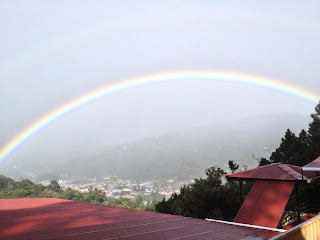 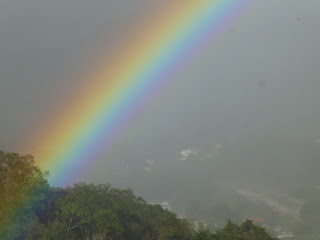 Yesterday, Friday, we found ourselves back in town for the Expat's Christmas Market via ride in from our hosts. As we're not in the buying mode, we looked and ooo'd and aaaa'd but didn't buy anything except frozen homemade lasagna to bring back for dinner some night. We were successful in mailing my daughter, Denise's, birthday gift at the reasonable rate of $5.25 from MailBoxes Etc. and the letter that Denise had mailed to us through MailBoxes arrived safe and sound. I picked up the dress I had hemmed at the local tailor for only $3, which was done in 2 days!

We were meeting our hosts, Lesia & Jim, at 3pm to go to the Grand Opening of a new restaurant down the road but had time for refreshing drinks at Baru while we waited.  It turned out that Rick was going to join us as well.

Off we went to Fusion, which is run by a couple from Boquete but who had lived in Canada.  The reason they named it Fusion was to show the blending of American/Canadian/Panamanian cultures.  We were the first ones to arrive for the 3pm opening but that turned out to be fortuitous, as it began to get very crowded with a great mix of expats and locals!

The venue and food were very good, the drinks excellent, and the DJ and Live band were GREAT!!! A fabulous time had by all with some Latin dancing thrown in. 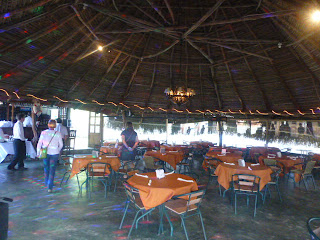 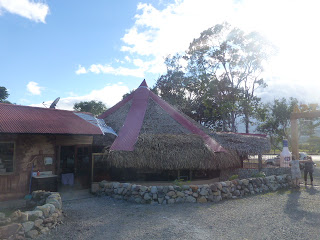 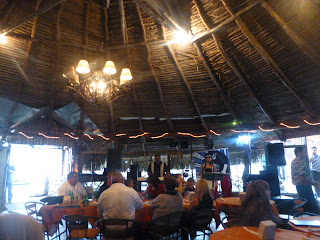 We had to leave early because we were meeting friends and neighbors of Lesia & Jim's to talk about Uruguay.  Brian & Terry Miller had been to Uruguay and had considered moving there.  They are terrific people and were very informative!

Mike and I had been waffling about keeping Uruguay on our Journey List. Listening to their story validated our decision to finally exclude it from our list. So, nope we're not going there.

Today, Saturday, November 24, 2012, Rick, Mike & I drove over to Volcan, a small community on the other side of the Volcano Baru.  It was a beautiful drive!  The topography is more gentle, rolling, and an open valley below the mountains even though the elevation is about the same as Boquete. It was also a bit warmer and not as rainy. 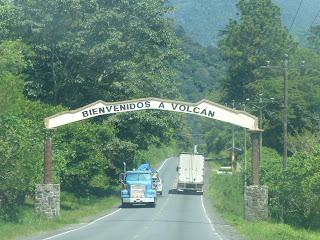 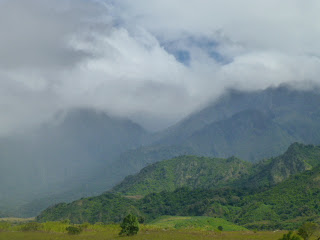 Rick had heard about a place that was known for its tremendous Humming Bird population so that was the first destination we sought. It was a bit outside of town but in the most glorious location!! Lush landscaping with a couple of creeks running through, the property was actually a beautiful B&B. The owner was gracious in letting us roam the grounds where we encountered many species of humming birds and enjoyed the lush landscaping! 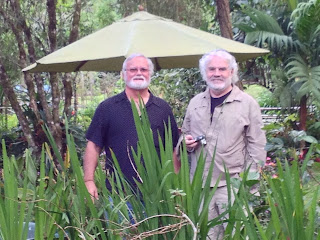 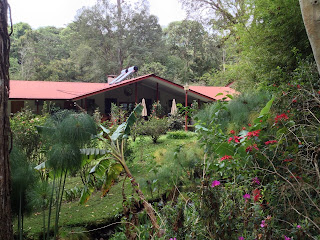 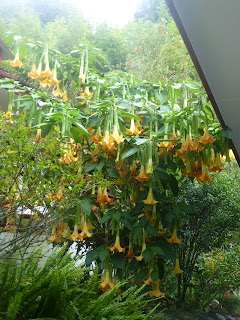 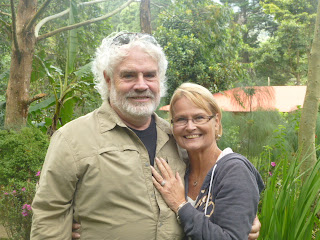 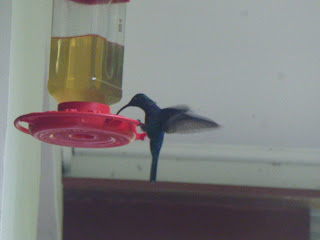 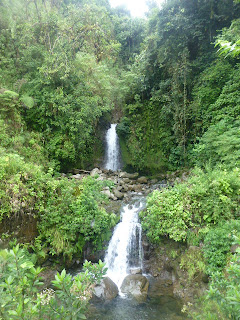 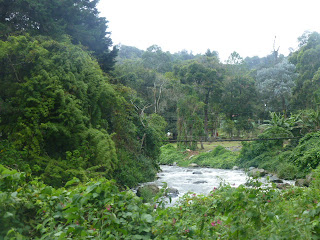 Off back into town for lunch at a great local place where we again devoured a great lunch!

Back in Boquete, we've decided to hunker in here at home for the evening and take it easy. Tomorrow is the 16 hour parade!!!  The drummers have been practicing until all hours of the night since we've been here. Can't wait to see them!
Posted by Tricia Lyman at 5:57 PM
Email ThisBlogThis!Share to TwitterShare to FacebookShare to Pinterest
Labels: Panama