One Full Week in Panama!

We got up early Friday morning to go on a 3 hour bird watching walk and our host, Lesia, was gracious enough to offer us a ride into town so, once again, we gladly mooched a ride. We met at the gazebo in the The Plaza along with 20 others. And, come to find out, many were from either Washington or BC. Hmmm, wonder what that means??

Not only did we get a chance to meet others who either live here or are "checking it out" like we are but we got to walk through many of the lower valley neighborhoods that we hadn't seen before. Since we think we'd prefer to live where walking is more friendly, this was a very good thing for us.

Our guides said it was one of the best bird sighting walks they've had!! Mike had the binoculars and I had the camera. We were both successful in our sightings. 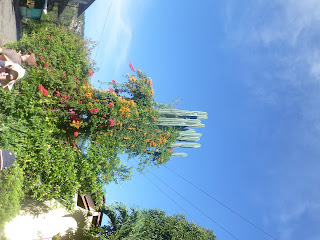 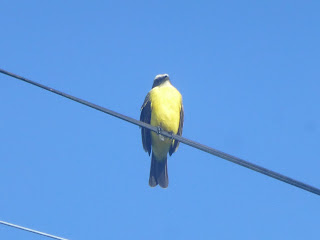 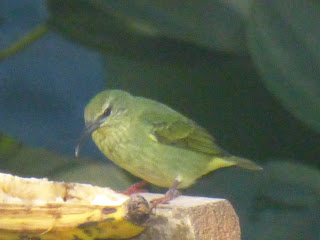 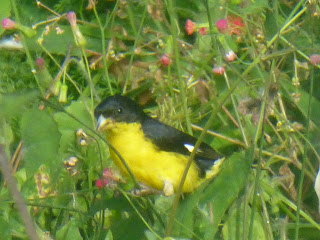 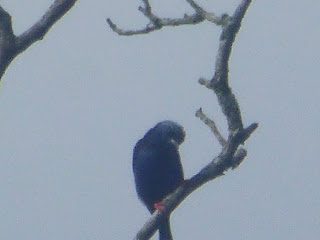 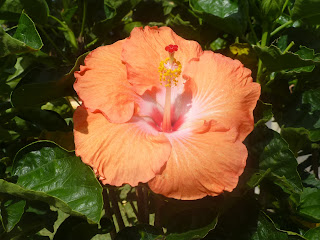 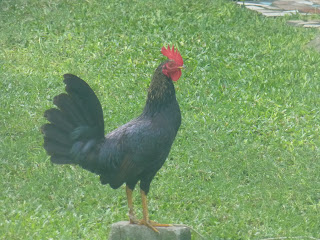 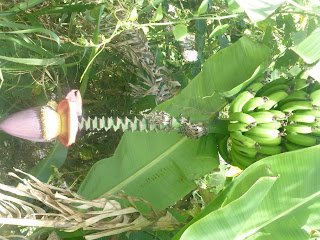 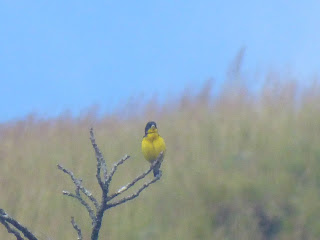 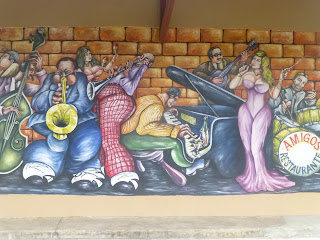 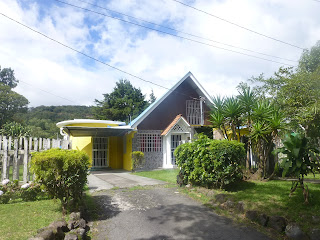 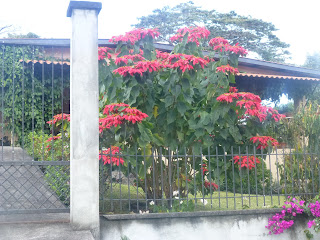 And, YES, that's a Poinsettia Tree!!

Afterwards off we went to lunch at Sugar & Spice owned by local expats, Richard & Yarina. What a treat!! A wonderful smell of freshly baked bread greeted us as we entered and a lovely menu for lunch to match!  I had an egg/bacon wrap with fresh butter lettuce (my favorite!) and Roma tomatoes. Mike had a Reuben that he thought was excellent.  It's a lively place and is very popular with the local expats. 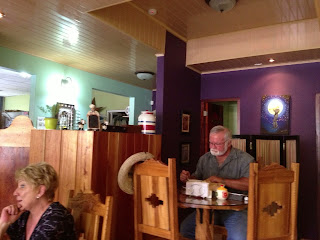 I took a picture and posted in on Facebook. In the picture was a nice looking gentleman with a white beard just like Mike's. Low and behold, later that day we met this man, Rick, who happens to be a tenant at the same place we are staying!!  There are 2 apartments below our host's apartment and we have the free standing casita.

We then set out with the intention of doing some more walking along the river but Mike has been fighting a cold since we got here and all of a sudden his energy drained. Rather than go back up to our casita, we decided to take a "local" bus up into the mountains. We decided to take the Arco Iris loop bus.

The local busses are usually vans, the longer distance busses are school busses and then some small regular busses. They congregate on the corner in town by a local grocery store and just wait until the bus is full. So it could take an hour or so for this to happen.

We were fortunate that the bus we got on was almost already full. And when I say full, I mean FULL. Crammed in with no seat belts and groceries, book bags of the local school children, etc. Off we went within 10 minutes. As this was our first local bus ride, we were fascinated with all of it - the dynamics of the inside of the bus and people (many indigenous Indians), shoppers, school children and the scenery outside. We were the ONLY gringos and we stood out like a sore thumb.  We just kept smiling!!

What was interesting immediately was how the bus catered to the old and the young! They are precious cargo and treated well. They are dropped off right at their home even if it meant that the bus had to back up huge hills to get to the driveways because it couldn't turn around otherwise. How they would drop one child off on one side of the road and then cross the street to drop off another at their driveway so that the children didn't have to cross a busy street. It was heart warming to witness!!

Since there was nothing to really "go to" on the loop - no stores, no cafes - we just rode the bus all the way around and got dropped off back at the same place.  The area we saw was beautiful lush forest and gardens! Beautiful neighborhoods with color everywhere! Our bus driver was quite amused by us. The cost for both of us was only $2.80! A very inexpensive tour!!

Since we were going to go to the Escondido Golf & Country Club Thursday evening for dinner and listen to Jazz, we waited for a local bus to take us up to Volcancito, where we are staying. Alas, before a bus could show up, a cab driver had put together 5 of us to get into his cab for delivery to the same place as the bus for the same price.

We were both going to relax and maybe take a nap but that didn't end up happening. Instead before you knew it, we had 5 guys (all expats) congregated on our front patio/lawn. I broke out the cheese and crackers, which were a big hit! Seems no one was aware that the local grocery store (Romero) had such good Goda cheese in the deli department.

Did I mention that Friday was a beautiful sunny day! By far the best since we've been here. I even got a bit of a sun burn from the bird walk.

Anyway, the afternoon slipped idly away as the guys hung out. And before we knew it, it was time to get ready to head down into town. So since we met our neighbor, who we knew was going to town that evening also, Mike went down to ask if we could hitch a ride. Well, sure enough! Not only did he take us into town, he drove us out to the country club, which he had never been to in the 8 months he's been here. 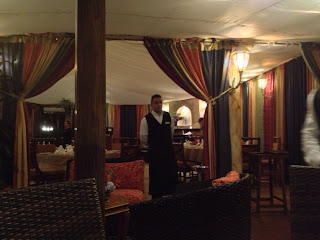 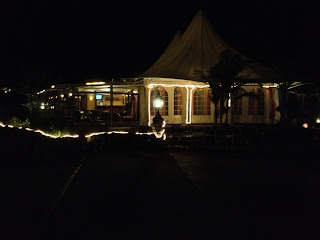 We had met the new restaurant manager, Craig, at Happy Hour on Thursday. He's the one that told us they were having Jazz Friday evening. He also told us that the most expensive thing on the menu was Filet Mignon for $15.95!!!  So we thought this was a good plan!

Sure enough, we both ordered the filet which came with potatoes and a salad. We also ordered a beautiful bottle of Chilean Sauvignon Blanc for only $15.95!  Where oh where could you do that in a beautiful country club setting in the US?? Total bill for both of us $56.00!!

Saturday brought me a sore throat - ugh!! So Mike and I are both fighting the crud.  As a result, we decided to not go out on Saturday at all. Our neighbor, Rick, came by to ask if we wanted to go into town with him but we said no thanks. He also invited us to Thanksgiving Dinner with him and some of his friends. So....we're all set for Thursday!!  We also set up that we would all go down to Mike's Grill in town today for dinner and football!!

The rest of yesterday was spent trying to find our homes to rent in Costa Rica. Found a few and corresponded with the owners but decided to sleep on it. Decided today to take another approach and found many more options. So the emails have been sent out and we'll wait to hear back.  If anyone who reads this knows of any rentals in Costa Rica, please let me know.

The weather still has not been as agreeable as we would like. High winds, lots of fog, clouds and rain.  But that's part of the discovery about each area.

Ciao till later!!
Posted by Tricia Lyman at 11:10 AM
Email ThisBlogThis!Share to TwitterShare to FacebookShare to Pinterest
Labels: Panama

One year ago, when we first started researching Panama, Boquete was our "go to" place. I read about Sugar and Spice (didn't the owner meet his now wife in Atlanta--she is Panamanian and was there for a wedding, vacation or something, and he was a chef in Atlanta?). I told my sister about the place because she owns a bakery, and I kept thinking "that is where I want to live". One year later, we are still figuring it out. These posts are going to bring back some old memories of when Ray and I first started researching Panama.