Oh My!! Way too many days since I've posted. Must be having WAY too much fun!!

Last I left you on our journey we were headed down our road to go have dinner. HaHaHa!! What you really have to learn in Panama is to stay really really flexible!! That's very much a part of the fun!

We were about 1/3 of the way up the drive into the palaypa down our road when from behind on the road we heard "GRINGO GO HOME!! YOU DON'T BELONG HERE!"  Mike & I spun around and you don't even want to know what was going through my mind!! Well, there in their white truck were our new friends, Lisa & Robert! Robert is the wonderful musician that played the night before at Smiley's and he's quite the JOKESTER!! Aren't you??

So they decided to join us for a drink.  The palaypa was under renovation so we all went down to Arenal on the beach. We had the greatest time just talking and getting to know each other!

So they dropped us off in town and we went looking for our next new place to eat dinner. I had told Elena, who I met at the baby shower, that we would come to her restaurant so we decided to do just that. Not knowing exactly where it was we wandered about a bit until we found it.  Pasta e Vino is an authentic Italian restaurant run by Elena and her husband, Daniel.  They do everything by themselves and it runs so smoothly!!! I was so hungry by then that I forgot to take pictures of our food! Believe me, it was delicious!!

After a leisure meal and stuffing ourselves, it's really nice that we get to walk off some of it on our way home.  We are truly enjoying the "walkability" of our home location.

Thursday morning, I again was going off with "the girls" to yoga on the beach.  Wayne invited Mike to go along to the "big city" of Chitre to do some errands and buying of materials they needed for a house they are renovating. 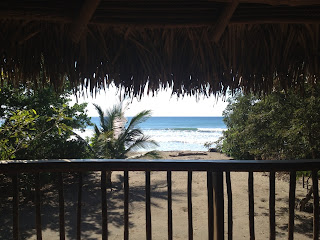 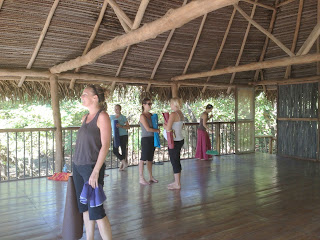 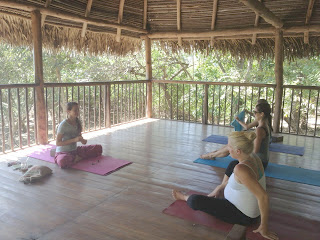 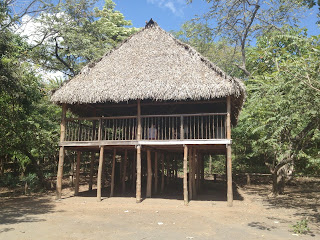 After another wonderful morning of yoga, we all stopped to have lunch at Pritti Pizza.  The poor woman who greeted us was wide eyed and in a panic!!  It was her FIRST day there making pizza!!  They decided to wake up the owner, who lives down the hill but was still sleeping because he was sick. 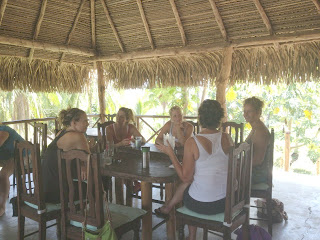 Anyway no ones in a hurry here and our pizzas were cooked one at a time because the main oven was broke. Soooo, 6 pizzas came out one at a time. By this time, we were all sharing food because of hunger. I, on the other hand, had ordered Lasagna!! Yeah, NO chicken!!  I didn't share because I scarfed it down way too fast. It was delicious!!

We arrived home before the guys, so we took our siesta time.  It's so nice to just kick back, read, take a nap if so inclined, and let the heat of the day pass.

The guys got home a bit after 5pm with news of a good day for them. Many errands accomplished!


Mike & I had planned to go up to a "movie on the porch" night at a local environmental research foundation where my new friend, Sophie, works on a year long grant to study the production of produce.  We had packed our cooler but just before we were to set out the power went out and didn't come back on right away. We thought we'd go ahead and walk up just to see if their power was out because sometimes we're told it could just be our street.

Before we left we decided to see if Christine & Wayne were planning on going and they weren't. But Christine had Sophie's phone number so she called to find out about the power and sure enough there was no power in all of town. Sooo instead we were invited in and the four of us hung out on the back porch and got to know each other better. Wine and beer were the only things on the menu that night!! LOL

Friday dawned another beautiful sunny day with thoughts of taking the bus to Las Tablas, about a 45 minute bus ride north from here and a larger town.  We waited and waited and waited for the bus. In the meantime, we struck up conversations with other Gringos.  A bus finally arrived an hour late but there were enough people for 3 bus loads!!  They said they were calling another bus but we decided to bag the trip for the day since we didn't have to go and there were many that did.

So what to do when things change...We set off to discover more of town and we certainly did!  Found The Patio, but it wasn't open yet and we were now getting very hungry at 11:30am. So we continued to meander up and down the neighbor hood roads. And, voila!! we happened upon Villa Pedasi, a little bar & grill tucked back into this beautiful walled community right in town!! 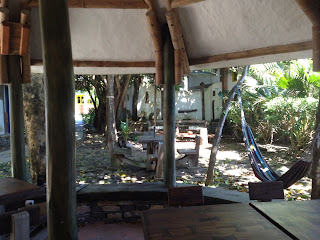 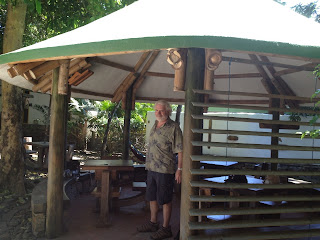 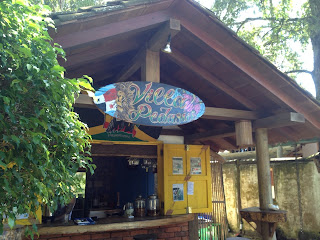 The palaypa was made of huge bamboo from Columbia and we met the young man who built it.  An Argentinian family are leasing the space with the intent to buy. However, they moved here from LA after living there for 17 years.  We struck up a wonderful conversation with them and had a delightful lunch!!  I had scrambled eggs & toast while Mike had fresh tuna bits on a hamburger bun with all the trimmings like a hamburger. He said it was delicious!!  We WILL go back!

We continued our walk through town exploring shops along the way. I bought a beautiful beaded belt that I had spotted a couple of evenings before in a very eclectic beautiful corner shop on the square, which is run by a French woman. She's so excited about heading to Hawaii for Christmas!

Mike & I are certainly getting our exercise because of all the walking and are loving it! By now, it was time for siesta, so we headed back home another way and discovered more "fondas", very small little food places run out of people's homes. We knew we had to "rest up" for our big evening out at Smiley's that night. Everyone was gathering there for music and Robert's & Lisa's last night here.  They were heading home to CA, where they live.

We were again struck by the high caliber of musician's here.  They played and we had a grand party with so many people that we've gotten to know over the past week.  The bongo player had to leave for a bit so Robert asked the crowd who played and Mike jumped up and played, having the time of his life! Leaving his drums behind was very hard so this was such a treat! 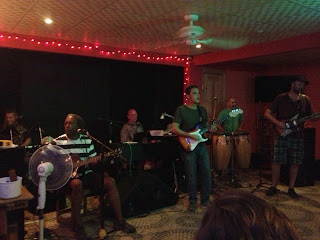 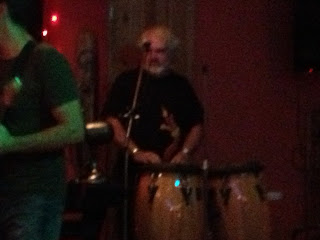 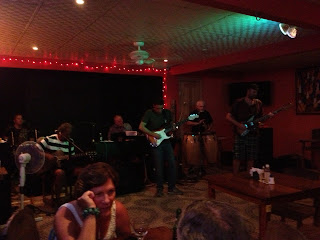 Before leaving for the night, we were invited to go to another party on Saturday with Don, a Scottish gentleman, who has a nice development in the works here. So on Saturday, which was Mother's Day in Panama, we headed out around 11:30am with cooler and backpack filled.

Mike had stubbed his little right toe earlier in the morning and it was painful for him to walk so we hailed a cab to take us the mile down the road rather than walking. As a result, we arrived a bit early.  Don was most gracious though and showed us around the home he owns that he renovated. Very nicely done with some beautiful views of the ocean from rooftop patio.

After chatting for about an hour and a half, Don got a call about business that needed to be taken care of before he could go to the party.  We asked him to take us down to the beach while we waited for him but we all had a beer at Arenal before he left us.  Mike & I walked the beach with feet in the water hoping it would help Mike's toe, which was now not only swollen but very purple!!

We came back to the restaurant and had lunch.  While sitting there, several boats came in from Isla Iguana, where we had been the week before.  We knew a few of the people so they joined us for a drink and we met a delightful German couple who were on holiday.  I got to speak a bit of my German, which was quite fun! 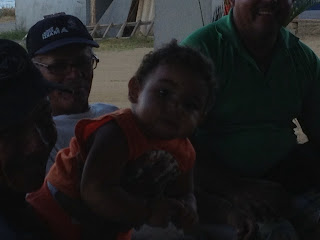 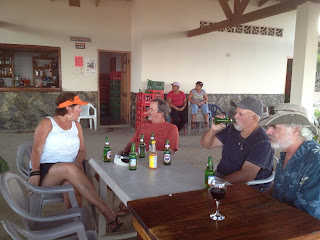 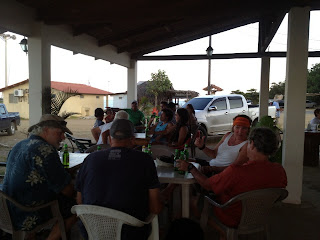 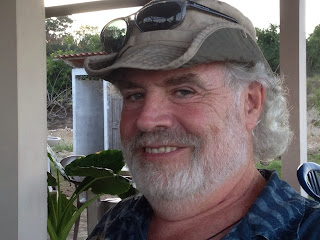 About the time those friend had to leave another wave of new friends arrived. We still had not heard from Don but who cares?? we were having a great time!  So Eden, Jim & Tim joined us for more drinks and talk.  Not long after, Don arrived back with his daughter, Abby (a true delight) and her friend. Plans had changed and Don was no longer going to the party. So we continued to visit and hang out with our friends and when they were ready to leave they gave us a lift home.

As Mike had to be up to leave by 6:45am Sunday for his fishing excursion, we settled in for the night.

Right now Mike's gone and I'm working on the blog but there are plans for the "girls" to get together in a bit, paint our toe nails, watch a movie and hang out. At about 1pm we'll head back down to Arenal beach, have lunch and wait for the guys to come in.

Happy Sunday everyone!! Hope yours is as wonderful as ours.
Posted by Tricia Lyman at 9:28 AM
Email ThisBlogThis!Share to TwitterShare to FacebookShare to Pinterest
Labels: Panama