My heart aches for all of those involved and I wish you only to somehow get through this because you will never get over it!

Before I get back to our comings and goings, we never made it to The Patio for dinner but instead had dinner again at the Pedasito. Scrumptious again!

Thursday morning there were 5 of us including Mike that went south to Eco Vaneo, the women for yoga and Mike took a great walk on the beach with the beautiful sun shining and the tide out.  It's a good thing too because the tide came back in that afternoon and it was a huge one and covered all of the beaches! 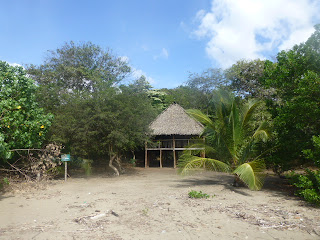 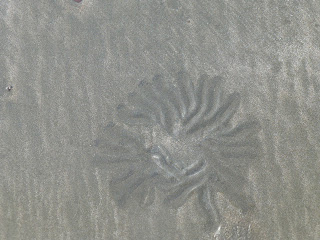 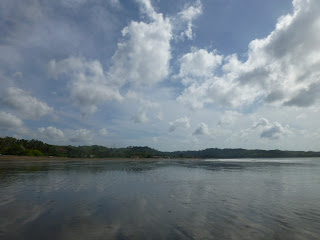 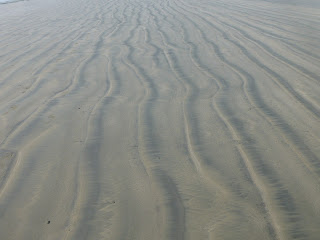 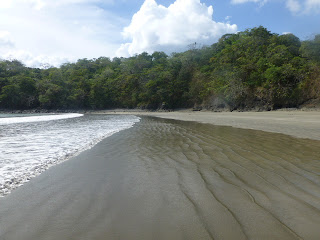 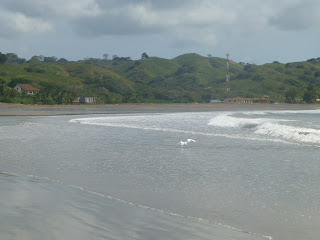 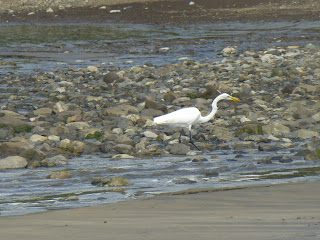 After another wonderful yoga session, Mike & I walked over to the restaurant at the hostel Eco Vaneo and had lunch.  We kept waiting for the monkeys to arrive but we didn't see a one. Well, come to find out, there was a huge group of the monkeys on the road just passed the yoga hut and the ladies all saw them upon leaving to go home and stopped to watch for quite awhile. They couldn't find us, so we missed out!!  Lucky you, ladies!! 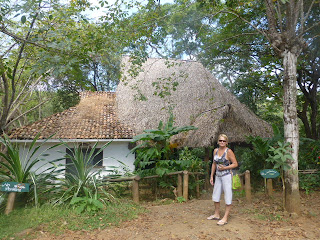 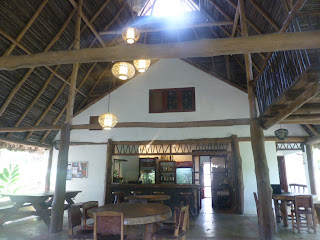 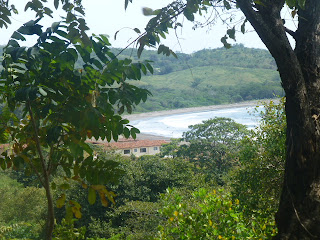 We then caught the bus to Cañas, a small sleepy fishing village further down the peninsula. I love riding the little van busses here with all the locals and children. Smiles and buenas dias' all around! The countryside is gorgeous with beautiful rolling hills and lush greenery. And, then the view of the Pacific!!

Not knowing the routine, of course, we got off a bit too soon! Although it gave us a chance to see "town" but we really wanted to go to the beach. Hahahahahaha!  We had to walk about a half hour to get to the beach and along the way said our many "buenas" to everyone you see. 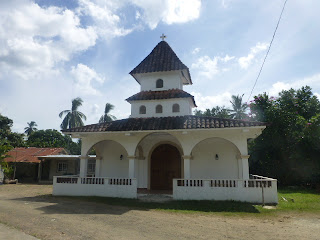 By the time we got to where we could finally see the water we were very hot and sweaty but decided rather than stop immediately at the local cantina where everyone was lounging around having a brew and talking politics, we would walk through the field where the bus was parked and the bus driver was taking a nap, to get to the beach.  WELL, NO beach!!  It was a muddy, ugly inlet!! No way was I going to step foot into that gunk!!

So we turned around and went and had a beer (Panama) at the cantina. We still had an hour to kill before the bus was ready to head back to Pedasi, so we decided to walk some more and came to the end of the paved road right at the water's edge.  NO BEACH!!  But we did talk with a "gringo", Derek, who happened to come down on his bicycle with his 5 yr old son. 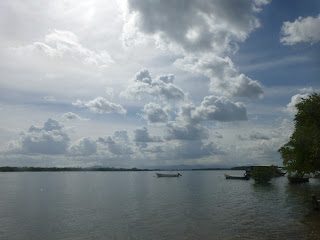 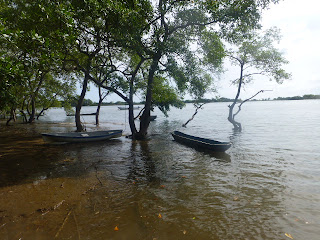 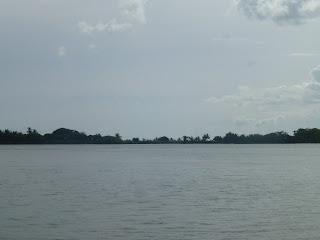 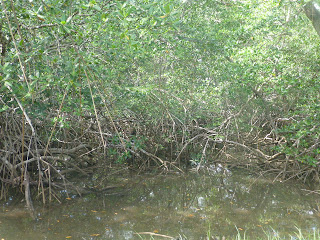 Seems he's been here for quite awhile and sailed a boat from FL down in 1993.  The boat is now a tour fishing boat for around the island of Cañas. This is where all the turtles come to lay their eggs and it's supposed to be quite something to see.  Season is right so we're not going over.  And, you'd have to endure the Chitré, a nasty little biting bug that just LOVES me!!  I've got bites all over my legs and arms because I'm soooo sweet!! LOL Mike not so much!

Anyway, it was quite a nice visit with Derek. But we headed back to the Cantina to be there by 3pm because you're never quite sure what time the driver will decide to leave.  Schedule is quite flexible!!  He did move the bus at 3pm but passed us right up because he was going to go down by the water where we had just been to "turn around" even though there was plenty of room to turn around right where we were! We think he still wanted to go grab a bite to eat - where we don't know - but he disappeared for another 15 minutes!! No mas! We had a nice 1 hour ride back to Pedasi.

By the time we got home, we were hot, sweaty, and pooped!!  We ended up having drinks and leftovers at Christine & Wayne's. Love hanging out with them!  They don't seem to mind hanging with us old folks as they're only a few years older than my daughter. :)

Friday was Spanish lesson day and off I went with a bit more confidence.  Even though I can't formulate sentences, I'm learning a whole lot of words and basics. Mike showed up for his lesson and I was invited to sit with them. Continuing to listen to the language is supposed to sink in at some point!!

It was during the lesson that I got the news about CT. Since I had lived in that area and my daughter and her family live fairly close by with my beautiful 3 grandsons, I was rocked to the bone. It just felt more personal in some way because I could see the town in my head.

Mike & I walked over afterwards to a small yellow house that Christine & Wayne had purchased with another couple, Rod & Melinda, who are from CO.  They wanted me to see it (Mike already had) and to give them our thoughts about possibly how to reconfigure the space.  Wow! I love doing that! And here, you really have to be creative due to the type and quality of construction. Very primitive!!

Oh, that reminds me, did I mention that International Living is filming an episode here?  Yup!! They are staging the program here with people we've met who are renting a house already, and one that's not so well built. I've also met the Realtor, whose young and easy on the eyes ladies.  The couple whose being featured is from North Carolina with young children, of course.  I had actually tried to submit us for consideration but they are only doing young people now - not us old fogies!! 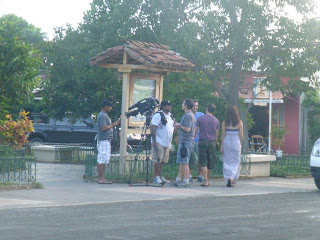 The rest of Friday was spent watching the news and just hanging around home. We certainly didn't have much will or energy to do much. Just didn't seem right.

Laundry today, house cleaning, the blog, but we're going down to the beach in a bit to have drinks with Christine & Wayne to just veg out and watch the waves roll in.  A very peaceful place to be.

Well, the blog didn't get posted because of internet issues so I can finish the day with this last update.

We went to the beach and watched it rain but it was a beautiful warm rain.  We watched the skies change before our eyes until it became beautiful blue skies again.  After having some Seco (Panamanian Rum) with orange juice and my vino blanco, we decided to head to town to continue our party at a cantina that is run by a wonderful, happy lady. So so gracious! 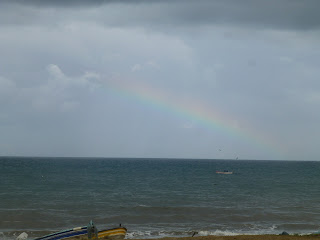 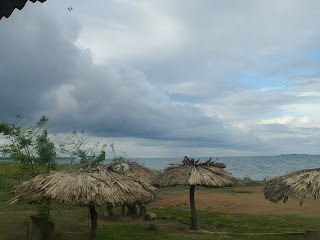 While there, Rod & Melinda, happened by on their way to have a drink somewhere else but they decided to stay and party a little with us and then Gerhardt wandered by....  I know - these are names that mean nothing to all of you but they are people we have met along the way and I'm not going to go into the details of how we all came to meet.

Anyway, after having a few more drinks and lots of talk and chat, Christine, Wayne, Rod, Melinda, Mike and Me went to dinner at The Patio.  This was a new place for us and we were not disappointed at all.  Besides the great company, the food was outstanding!!  We had 2 huge plates of Mediterranean antipasta, and each of us full plates of beautiful chicken corden bleu with milky whipped potatoes.  Mike & Melinda had extra large shrimp with rice.  Plus, wine, desserts, after dinner drinks, etc.  ALL for only $50/couple!! 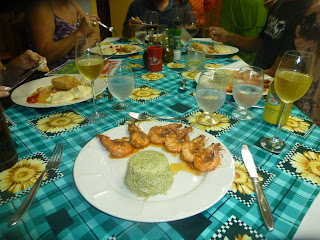 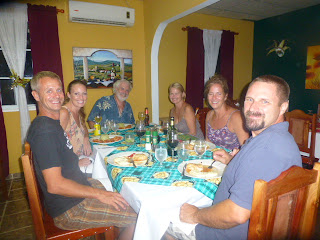 So Chau again, my friends!! It's time to say Buenos Noches!!
Posted by Tricia Lyman at 9:34 PM
Email ThisBlogThis!Share to TwitterShare to FacebookShare to Pinterest
Labels: Panama