Did you all know that the "original" Gorgona was right where they built the canal? It got flooded just like Kettle Falls, WA and Marcus, WA.  So....they had to move it, which is where we are right now in Panama. Gorgona is 1 hour south of Panama City right on the Bay.

Anyway, Christine & Wayne drove us up on Sunday and we arrived about 1:30pm.  The traffic was simply INSANE, as it was a holiday weekend.  They were celebrating the anniversary of the riots over the Canal back in 1964, which played a big part in the US turning it over to them. The US Consulate was putting out all kinds of "be careful" warnings to expats and US travelers to just stay low and be mindful.

We met the landlord at a local Mercado and followed him to the building. Good thing because we would never have found it. It might be a very small village but it has it's twists and turns to get around! LOL

After meeting our "door man", Oscar, who Mike has fallen in love with because they sit and chit chat in Spanish, we took 2 elevator rides up to get everything up here on the 3rd floor.  The condo is actually quite large in space and has a BEAUTIFUL view of the ocean but is sorely lacking in many other respects.  We knew we would be giving up some amenities to have this view and easy access to the beach.  That's life in Panama!! 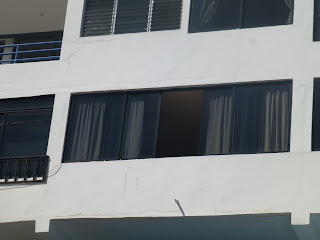 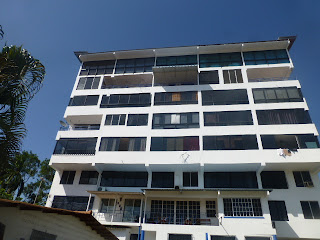 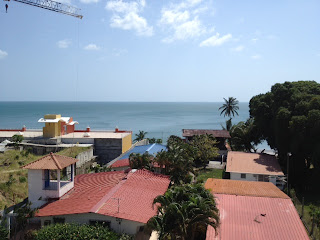 Anyway, "Dennis", the property manager was so full of himself!  And, very overwhelmed with his "job".  The real property manager is in the states on vacation.  We get to pay the price and to hear about it every day. Told us that La Ruina was not a good place to go - ha!! he knows nothing!! Don't like him and certainly don't trust him.  How's that for a review??  Certainly makes us more appreciative of the great service and friendship we have with both our previous landlords/hosts!!!  THANK YOU Jim & Lesia and Christine & Wayne!!  You are all fabulous!!!

We got through a total misunderstanding about what cash was still due at move in, he wanted not only the remaining balance for the month but another $300 security deposit, which was new news to me.  Since we weren't prepared for it, he agreed to take a US check for the amount.  Then off he went with our keys!!  So he had to come back before we could leave and go find food and drink.

We did find, to our great pleasure, that we're only 2 blocks from the local gringo hangout, La Ruina. AND, that it's a GREAT place for food, service, and meeting people!! We all had a great time, Mike got to watch the Seahawks win and by the end of the evening, Mike was going big fishing with "the guys" today.  So, we highly recommend it!! 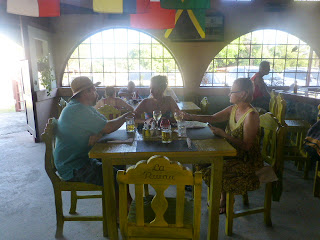 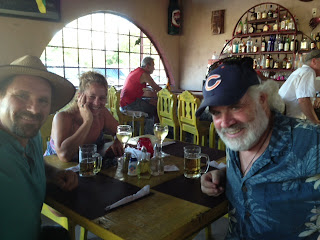 Christine & Wayne had brought their air mattress for spending the night and there was plenty of room.  So we all hunkered in for our first nights sleep. We were really hoping that the bed was comfortable - and it was!! That's a BIGGY!! We've been very fortunate to have all 3 beds so comfortable.

As it was a holiday, Christine & Wayne wanted to hit the road early to get ahead of the truly crazy drivers here.  The later in the day, the crazier they get because they drive when they're really drunk!!!  Most expats here won't drive after dark either because sometimes they turn on their headlights and sometimes NOT!!  Another good reason to take local transportation or mooch rides - LOL!!!

Before we could unpack I had to completely clean the condo.  It was awful with lots of sand in every drawer and on every shelf and other "dirt" I won't even go into.  We then unpacked and rearranged furniture and cabinets to make it workable.  Believe me, they already have a better unit that they gave us! Maybe they should pay me!!

Mike and I discovered another Chino (Mercado owned by Chinese and most are). No disrespect because that's what all the locals call them.  Anyway, the one only 1 block from the first had much better prices, so we bought only a few things to get by the day with.  The big shopping was going to be on Tuesday at Super 99 after all the holiday madness goes away.

The afternoon was spent walking the beach both north toward Gorgona Beach and then south toward Corondao, the next beach community.  The beaches here are a mixture of black diamond and white sand and until you get to the water's edge, it's hotter than shamolies!!! I even got a blister on the bottom of my foot while wearing flip flops. 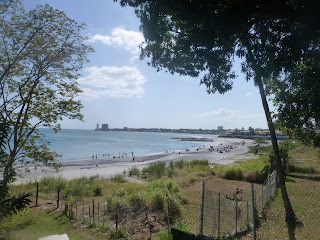 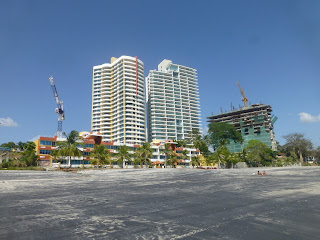 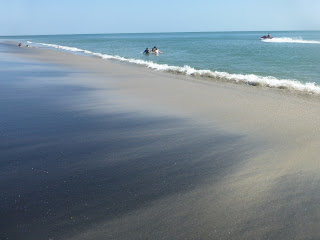 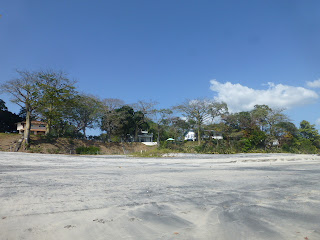 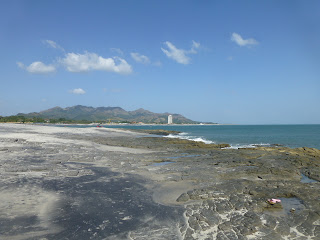 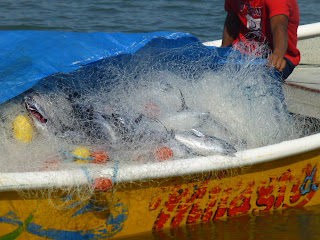 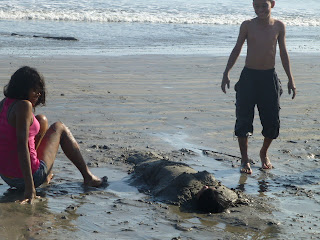 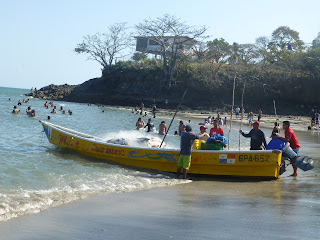 So, what a great walk!!  We were the ONLY and I mean ONLY gringos on the beach!! Not hard to figure out when one of us is all beautifully white haired and the other blond! We found that they have "beach clubs" here where you pay to get in.  There are swimming pools and a bar.  We walked into one without paying up from the beach.  They sold us our beers (Miller lite for $1/ea) but asked that we drink them on the beach. At least they were extremely nice about it.

Coronado is a total planned community and you have to pass through a gate to get in. What's amazing is that there are NO bars or restaurants on either beach.  What a waste of a beautiful view and setting!! At least in Pedasi, there was a fonda/bar at Playa Arenal.

Mike & I discovered on Monday that the hook up for the internet and TV wasn't working properly.  The splitter was missing so you could only work one at a time. A real pain!!  So we just hooked into someone else's internet.  But Mike did get to watch the bowl game.

Oh, and the hot water stopped in the middle of my shower!!  That's a BIG no no!!! Mike had already fixed the propane tank for the cook stove earlier. Oh, did I mention that the tank is right next to the stove in the kitchen???!!!! And, wait until you see the picture below of the "suicide" shower!! LOL  When in Panama..... 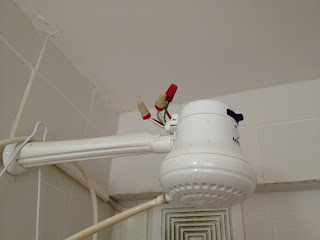 Yesterday after a relaxing morning, off we went to the bus stop.  Instead of waiting for the bus, another expat that we met, Anna, came by on her way out and offered us a ride to the main highway. We saved a whopping $.30/each for the trip!!  We then walked across the highway with quite a bit of ease, which I would NEVER have attempted to do over the holiday!!! Caught the bus headed down to Coronado - another $.30/each - and voila, there we were in the midst of many shopping choices and restaurants.

We had been told that California Burgers was good, so that's where we went.  Haven't had a burger since we left the states and this was soooooo good!! Met the owner, Ken, who come to find out, is the brother of our true landlord, Kathy.  There's also a local BBQ place right next door that we're going to check out too.

We then headed out to do some shopping.  Based on Ken's recommendation that prices were the best at Super 99, that's where we went.  Since it was on the other side of the highway, we had to cross over but traffic had picked up so we went via the bridge crossing that they have right there.

So we loaded up on groceries - wine, beer, lots of different meat, cheeses, snacks, staples - about 8 full bags and the grand total was $106.  Not bad at all!  Took a cab back and he stopped for us at the department store so we could buy a couple of outdoor chairs to enjoy sitting down by the beach.  The total cab fare was only $5 to our door.

By 5pm we were sitting in our new chairs with a beautiful ocean view having wine and beer!!

As Mike was getting up at 4:30am to go fishing, we went to bed a bit early.  Well, that didn't last long!! Our "gringo neighbors" who live next door got in from the airport at 1am.  And, because they just have to be hard of hearing by the looks of them, they were yelling at each other rather than talking normal or even, god forbid, softly!  Our bedroom window is in their entry hall and so we have it open to take advantage of the evening breezes to keep from having to turn on the air conditioning.  Well, not any more!!

Mike got out on time and I went back to bed.  Was in a sound sleep finally when, yup, the neighbors decided to sit in their chairs right under our window and yup, they started yelling at each other and the person on the phone they were talking to.  That person could have heard them in the US without a phone!!!!!!!!!!!!!!!!!!!!!!!!!!!!!!!!!!!!!!!!!!!  Going to have to make a point of meeting them soon and kindly, tactfully saying something.

Today I was able to get both the hot water and the TV/internet issues resolved, so that makes things much easier.  And, here are some inside photos of our "home".  Looks better in the photos than it really is! LOL 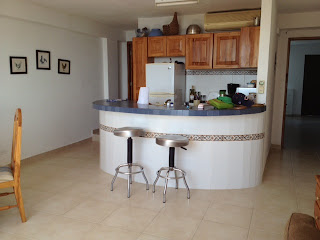 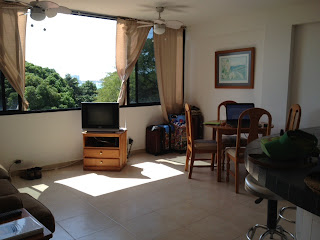 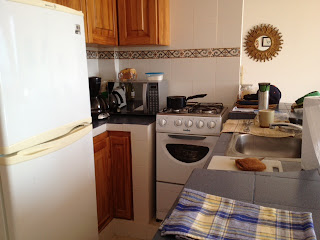 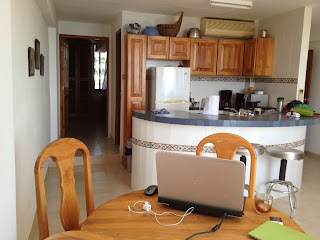 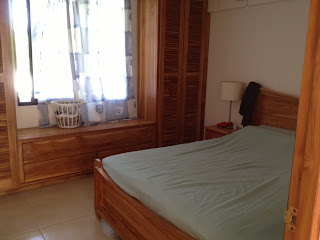 Time to change my nail polish to a new pretty blue that I just bought and go walk the beach!!

Posted by Tricia Lyman at 12:46 PM
Email ThisBlogThis!Share to TwitterShare to FacebookShare to Pinterest
Labels: Panama

oh this is wonderful! love your new nail color...saw on fb. you two are adorable...moving around, settling in somewhere new every month. what an adventure. thanks for sharing. xo s

When we stayed in Coronado, we were in The Solarium (found a 2 bedrm through Tripadvisor). We never made it to California Burger (on my list for the next trip after reading this post!), but we did go into all of the grocery stores, Novey, Oracle wasn't open yet, and went to Locos to meet Stephanie and David with our at the time virtual friends, Clyde and Terry (along the gringo trail blog). I did not enjoy Coronado's beach, but I loved Santa Clara (never made it to Gorgona beaches). I can't wait to keep reading the rest of your days in Gorgona!