Monday turned out to be laundry day. Before we arrived in Gorgona, our landlord asked if we needed laundry service since there were no facilities in either the unit nor the building. But, of course, I said. Well, that didn't go so well.....when we arrived, I was told that no arrangements had been made yet. And, when I inquired what the cost was going to be, I was told $20!!!!!!!!!!!  Oh, no way!! Everywhere we've gone you could take a large basket full into the Laundromat and it would be no more than $4 so there was NO WAY I was going to pay $20.

After asking around at La Ruina, we were told that the owner's sister, who lived next door, did laundry for many in the area.  It would be hand washed and line dried.  So that's what we did.  Our full basket with clothes and towels was washed in the most delicious smelling soap, dried, and folded all for $6. Now that's the way it's supposed to be!!

We also took a beautiful very long walk up the beach toward Coronado and found the small walkways that lead up into the gated community that allow those not on the beach to have access.  Beaches here are all public but it's hard to find access sometimes due to everyone building so close together and putting up fences all the way around their property.  However, we were looking for a restaurant/bar that was close to the beach. Nada, nope nothing.... Bummer!! 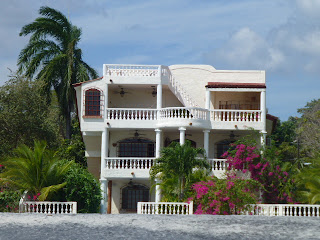 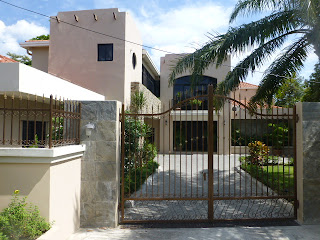 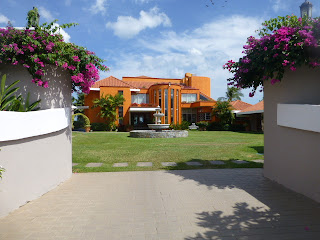 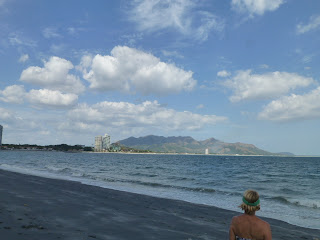 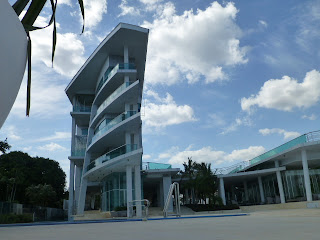 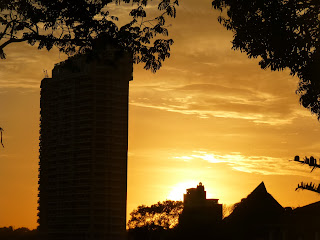 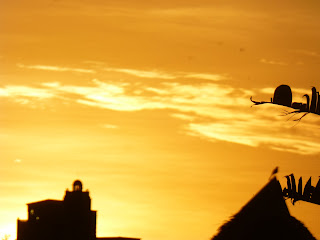 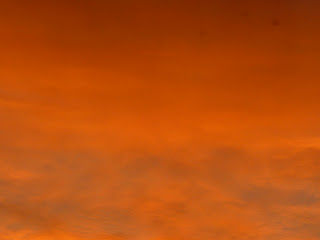 Yesterday we got an early start and decided to head down by bus to Playa Blanca or the actual town of Farallon, a quaint small fishing village. We had read that the beaches were excellent and that there was much more going on there.  Our bus ride was about 45 minutes south and we were let off in the middle of a construction zone right where the new big airport is being built. So our crossing to the other side of the highway was actually easier because the traffic had to slow down.

We've gotten really good at running across the highway though and now we feel like locals!! LOL  The other day when we were crossing at the Gorgona stop, I almost fell into a huge manhole because I was trying to avoid almost stepping on a very dead dog carcass in the median! And, yesterday there was a newly dead beautiful rooster by the actual bus stop.  Life as a "local".

Anyway, we made it down to town and found it quite charming.  At the end of the road, it dead ended at the beach right where there was a cute beach restaurant/bar overlooking the fabulous white sand beach and blue waters.  We sat ourselves down and I let out a huge sigh....this is what I've been looking for!!!  Mike was not overly impressed with his Langostino and thought the $14.50 should have been more like $8-$9 and because I eat no seafood, my only choice was a warmed carrot and cabbage salad.  It was good but NOT $7 worth!! 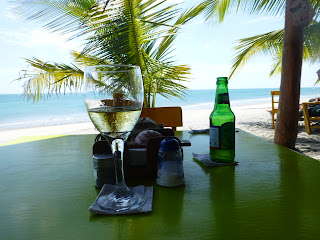 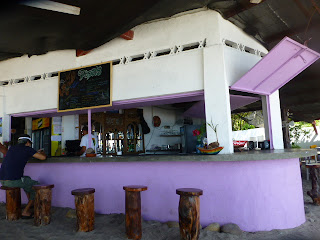 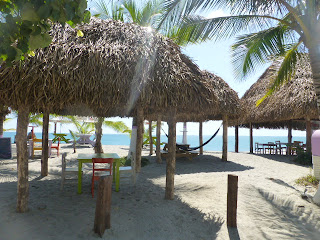 But, we did enjoy the atmosphere and from there went for a terrific walk along the beach picking up garbage along the way.  Our little contribution for the day.  Our intent was to see about buying a day pass at the all inclusive resort.  We weren't even allowed to pass through to go to the lobby. The guard showed us how we had to go around but we finally found it and were promptly told that it was $60 for the day but you had to be there first thing in the morning to get one.  Hahahahaha!!  I think NOT!! 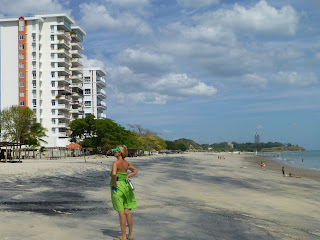 So we meandered our way back down the road and back out to the beach where there was another gringo bar/restaurant called Woody's sports bar.  They are Newfoundlanders and have just moved into new digs.  They were busy getting ready for their grand opening today. Many, many Canadians here.  Everett, one of the owners, came by our table and sat down and we had quite a nice long chat.  He and his wife are real estate agents and so we talked real estate for quite awhile.  In Panama you don't have to be licensed.  As long as you have a Panamanian Broker, anyone can sell, manage, etc. A real free for all just like the old west! 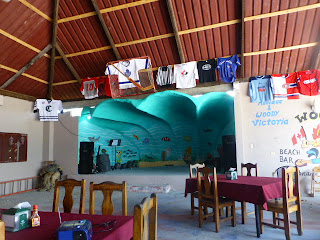 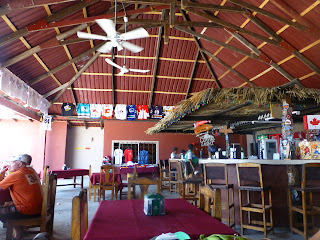 Today, Mike gave me a Spanish Lesson.  We're going to try to do this every day due to the lack of options for lessons here.  It was really nice sitting in lawn chairs overlooking the ocean on the patio down below.

So tomorrow we are off to the BIG city of Panama or PC, as it's referred to.  Our friends, Lesley Mann & David King, are flying in today from Colville, WA.  It's because of Lesley that we found our place in Pedasi and because of me, they found their place in Boquete.

Up early to catch the bus no later than 7:30am, we'll be taking our first bus trip into the city. It will take us all the way to Albrook Mall & Bus Terminal, where it all began for us back on November 11 when we flew in for the first time.  From there we'll take a short taxi ride to where we're all staying, Hostal Amador Familiar in the Canal District.

They are getting a car and we'll all then head up to the Miraflores Locks to see the canal in action and maybe a hike while up there. Dinner somewhere either in Casco Viejo (Old Town) or along the Causeway on the bay.  They will bring us back to Gorgona on their way to Pedasi on Friday.  They are going to be staying in the apartment that Mike & I did.  Pretty cool!!

So, off to the beach!!  Chau!
Posted by Tricia Lyman at 4:13 PM
Email ThisBlogThis!Share to TwitterShare to FacebookShare to Pinterest
Labels: Panama