This is it! We're leaving Pedasi in the morning. And, our wonderful hosts, Christine & Wayne, are driving us the 3.5 hours up to Gorgona, which is only an hour south of Panama City on the Pacific Ocean.

We had a fabulous time New Year's Eve with friends at their home!! Great food, good conversation, lots of laughs, and some local Panamanian friends who played music for us until midnight by the bon fire!! We finished off the night with a night cap at Smiley's and then headed home. 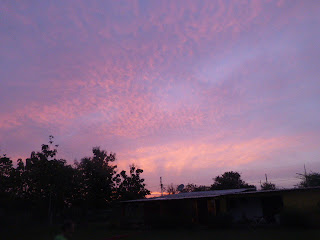 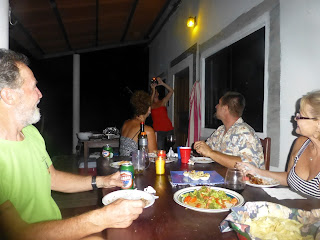 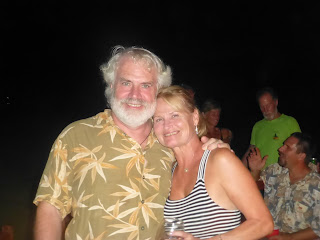 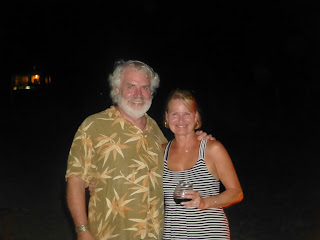 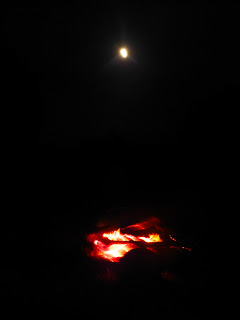 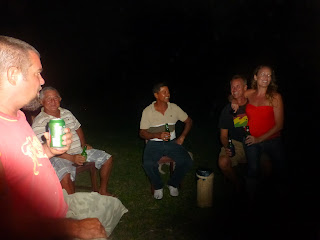 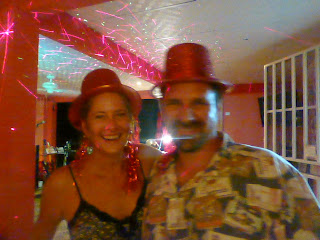 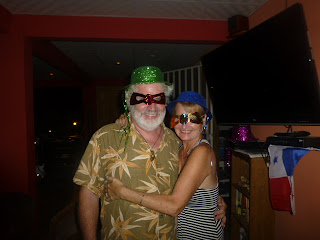 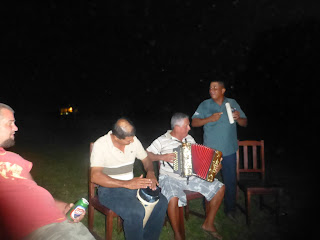 Since we started at 6pm, I think I might have had a bit too much of the vino blanco and tinto because Tuesday - New Year's day - I was the laziest, tiredest bum around!!  I think I'll throw Mike into that mix too. We slept until 10:30 am, got up for about 2 hours and I went back and took a nap for 3 more hours!  I think the recovery period for that kind of partying is way out of whack!! LOL  So not much got done but sleep, a bit of Spanish homework, and a lot of college bowl games were watched.

Wednesday we were back to our normal routine of Spanish lessons in the morning but Mike had decided that he was going to make a piece of metal art for Christine & Wayne's home.  All of the large wall space that this home has in incredible with its high ceilings and Mike wanted to fill one of them!  With only a few more days to go he had to kick it into gear so that's what he worked on all afternoon.  He decided to do a Sail Fish that is about 8' wide and about 30" high. 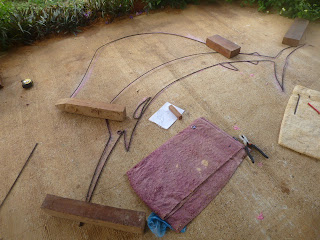 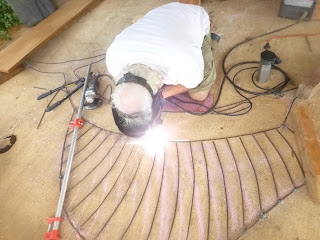 Thursday was yoga in the morning for one last time down on the beach but I still had yoga Friday afternoon here in town.  Mike had an extra Spanish lesson but then again worked on the art until dinner time.  We decided to go to Pedasito Café & Wine Bar for one last time and we weren't disappointed.  The food there is scrumptious!!

Friday we both had lessons in the morning and Mike went to work on finishing his beautiful sail fish.  His goal was to complete it, paint it, and be able to hang it on Saturday morning.  Mission Accomplished!!

However, Friday evening, for one last time, we went up to Smiley's and had a good dinner before Mike hit the congos for one last session with the guys!  Some of our friends came and we had a great evening. 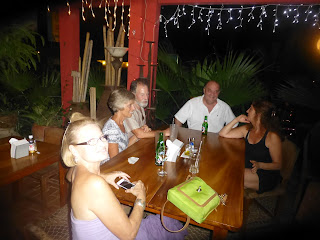 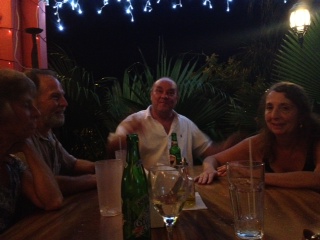 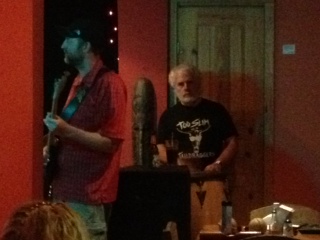 So this morning, we began to wrap things up here.  I had pilates for the last time while Mike painted the fish.  Amazing how fast things dry when the breeze is blowing so beautifully!  So right after our pilates, up it went on the wall!!  We all stood around just beaming at Mike's creation! 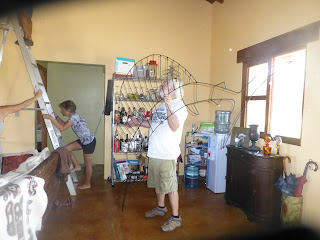 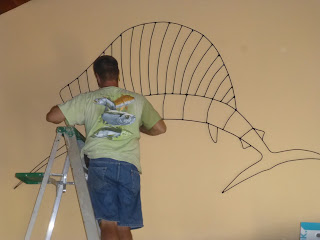 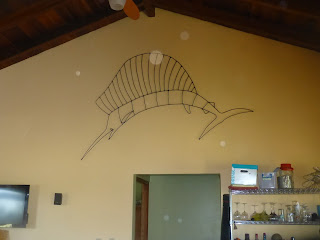 So that completed, Mike & I are doing laundry, a bit of cleaning, updating the blog, and packing.  We'll have one last evening out here with Christine & Wayne at the local fonda up the road then over to some other friends to say our "See Ya's".  Up early tomorrow for a 9:30am departure.

Will be posting next from our new home for another month in Gorgona.  It's a 3rd floor condo with 180 degree views of the Pacific Ocean and only a 3 minute walk to Malibu Beach!

Until then....be happy, healthy, and safe!!
Posted by Tricia Lyman at 3:06 PM
Email ThisBlogThis!Share to TwitterShare to FacebookShare to Pinterest
Labels: Panama

Still, very much, enjoying your posts and your travels.
Living vicariously through you!!
Bunny

thanks for sharing this love it and the Mike's fish totally rocks!

That fish is amazing. Enjoying your blog very much.