In last week's post, I spoke of my good friend, Susan Heer's passing.  Well, right on the heels of that, I got word of another good friend's passing in Granada, Nicaragua.  Mark Leach was a big man and a bigger personality.  Although gone way too soon, he lived life to its fullest and never let any grass grow under his feet.  I ache for his lovely wife and friend, Nichola.  May his soul be forever entertaining others!  Hasta luego, mi amigo!!

We also gave our 30 day notice to our landlord here last weekend that we would be vacating early.  After some animated discussion, a mutual agreement was reached and we are now on the short down strokes of moving out.

Mike even came up with a grand idea for getting to move out even earlier.  We have a banked week of timeshare so we called to find where there might be an opening the week before we can move into our new place.  Sure enough, we now have a week's stay at Villa del Palmar.  Nothing like going on "vacation" right here in our own town!! LOL

Spanish lessons continue to go well. One of my morning rituals is now to buy juego naranjo (fresh squeezed orange juice) from a lady who squeezes the oranges right in front of me while we have a rudimentary conversation in Spanish.  I then drink this juice during class and feel much more awake and engaged.  She knows my name because I introduced myself but she hasn't reciprocated yet.  This coming week, I will ask her in Spanish, of course!

This past week also saw Mike and me invited to speak about our process for making this journey and choosing a new home country.  It's not to be country specific but about the actual process we developed.  Yes, International Living has graced us with an invitation to speak at their 2014 Ultimate Event here in PV June 4-7!!  We are so very, very honored!!

I woke up in the middle of the night and started organizing in my head the PowerPoint presentation and talking points.  So the first thing I did when I got out of bed was to fire up the computer and see if I could remember how to use the program.  Yup, still got what it takes!  And, a very good head start on the 25-30 minute talking time.

Mid week saw me post our last month's budget update, which continues to show us that living on less than $1,000/month not including rent is way possible!!  It also spurred us to start formulating an actual full YEAR budget accounting within one country.  Being a true tourist destination and having a large snowbird population (3-5 months of living), we are finding that there really are 2 different Vallarta's.

High Season and Low Season.  Each brings with it a different lifestyle.  Most of the fundraising, theatre shows, and other activities occur during the months November - April.  You literally could go broke and never have a down moment if you tried to do it all.  So we aren't.  Like anything else, we are having to pick and chose what's most important at the moment and prioritize.  Many events will just have to wait until next year's high season.

So, it will be interesting to see what happens with our budget once things come to a crawl around here.  And, we've heard that things pretty well completely shut down here in September.  That's when many of the restaurants close to go on vacation and it's supposed to be the wettest and hottest time of the year.  We'll see.  Maybe we'll take a trip up to the mountains and see a few places we've not been before where it's a bit cooler.

Tuesday was the Expat Happy Hour again at Langostino's.  This week we met Mike and Sandie Wick from Minnesota. Wonderfully delightful people!  We had no trouble finding things to talk about with all of ours and their travels.  And, afterwards we all went out to eat at Los Muertos Brewing for pizza and beer (I had wine, of course). 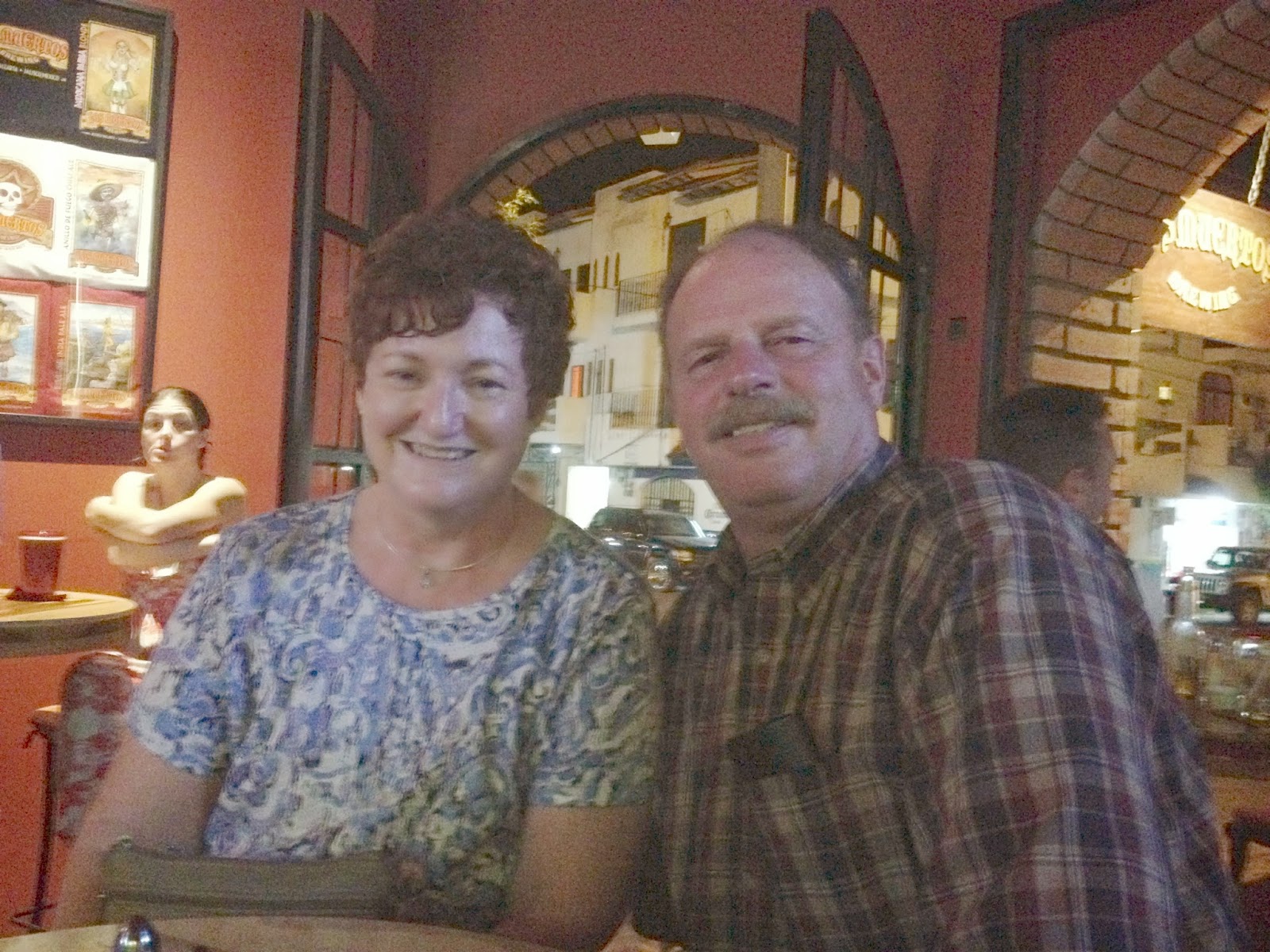 Mike & Sandie
Some random pictures from around town: 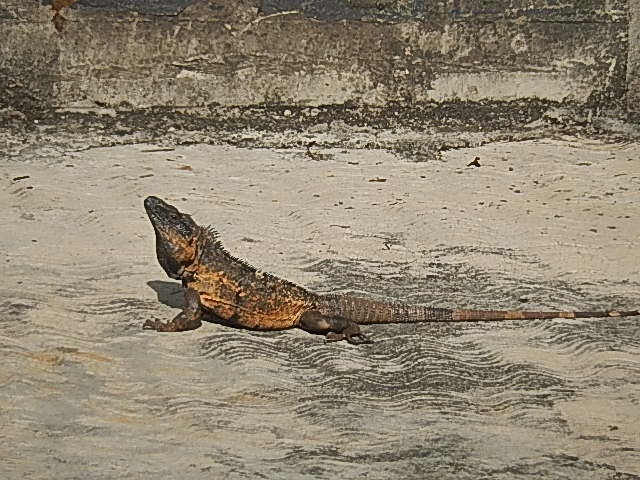 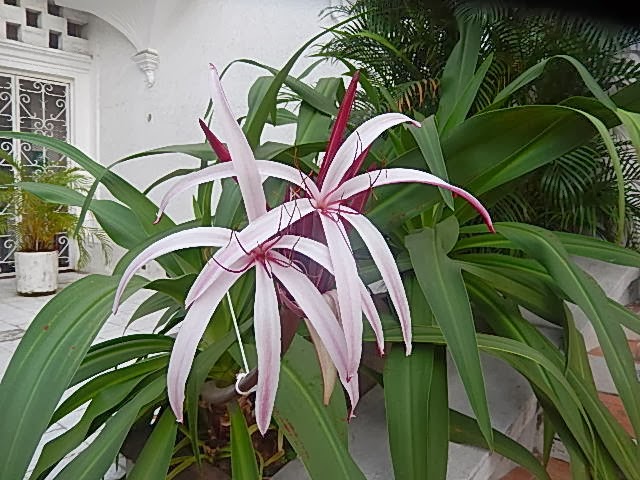 A beautiful flowering plant that we pass almost every day. I have no clue as to the name of it. 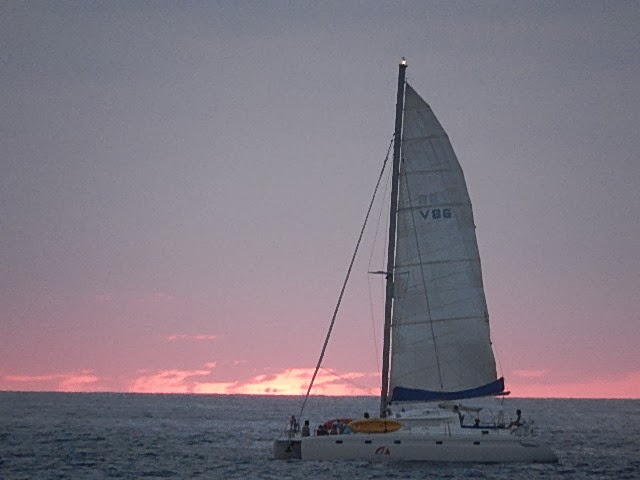 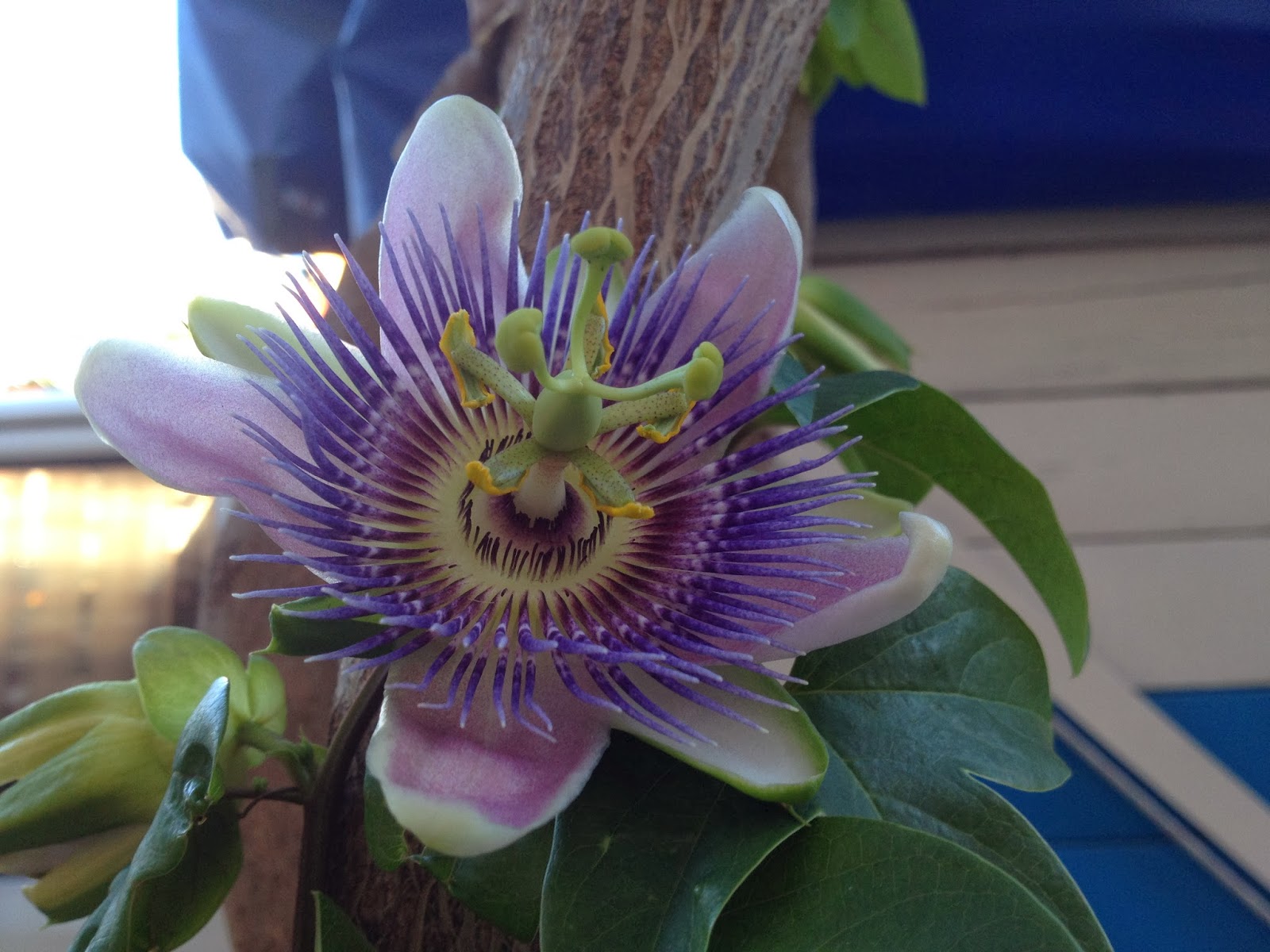 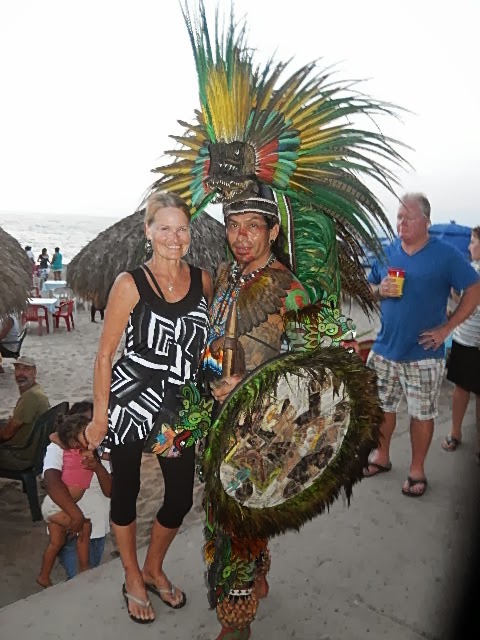 Mike has continued to work his shifts at the PCC selling tickets to the Oscar movies that started showing last Saturday night with a different one each night up until the Gala on Sunday.  We're going to all of the movies and have already enjoyed HER and American Hustle.  I have to say, I thought HER was absolutely fabulous and what a love story!!  I certainly didn't expect to like it at all but that's what happens when you keep an open mind.  Amy Adams was in both of these movies and she was terrific in both.

We've been invited to a private Oscar Party around the corner from where we currently live.  It's at Jim Lee's home, Casa de Perro Azul (House of the Blue Dog).  Jim is an event planner and we simply can't wait to be a part of this!  So, we have to get out our Red Carpet attire.  Hmmm, Mike's not a suit kind of guy especially since he's never owned one! Guess it will be Casual Dressy Beach attire for him.  He did buy a new dressy beach shirt at the consignment shop, Deja New, the other day. Stay tuned for an update on this event.

Our friends, Mitch and Stephanie, returned from their week of travel up in the states so we got together at their new place for drinks before going to a comedy show at The Palm.  The woman's name is Shaun Polanski, in case anyone has seen or heard of her.  She was funny but it just didn't click totally for us but we had a good time regardless. And, it's always fun seeing friends and being out and about in town. 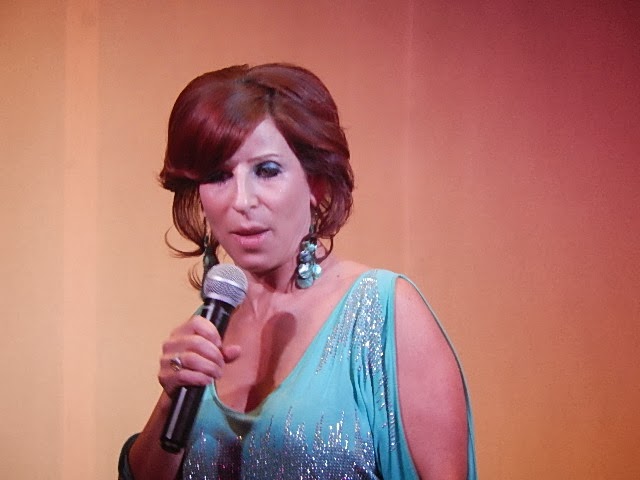 Saturday we made our trip down to the PCC Co-op Market and Mike worked a 2 hour shift for tickets.  It was the busiest he's been with no time for any break, as the people were lined up waiting.  I, on the other hand, had a great time browsing through all of the vendor booths.  It was extremely busy and lots of people! You can certainly tell it's high season in full swing.

I bought a new beautiful handmade over the shoulder handbag, a bag of toasted candied pecans (yum!), and had a back, shoulder & neck massage!!  A great morning for me!  Then it was time to buy a delicious roasted half chicken dinner with mashed potatoes, and coleslaw for only $60 pesos ($4.50) and it was plenty to feed the both of us. 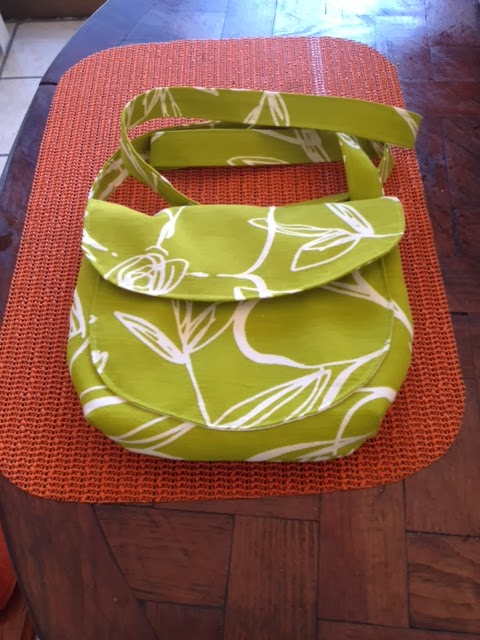 Then back that evening for the movie HER.  Since it finishes about 9pm, we decided it was way too early to pack it in for the night.  So a nice stroll up Basilio Badillo to Nacho Daddy's to hear our good friend, Joe King Carrasco, play with his band.  I hadn't seen him since he returned from the states where he released a new music video.  It was great to give him a huge hug and enjoy his music.

We finally got to sign our 1 year lease to our new "home/apartment" on Sunday afternoon!!  Dave Smelser and Frank Heck are our new landlords and we couldn't be more delighted!!  Dave is just a real down to earth kind of guy.  As Frank has been in the states with family, we haven't had a chance to meet him yet.  Looking forward to it!

Back up the 100 or so stairs from lower Pulpito to upper Pulpito for our trek back home (yes, and these are easy stairs!!), before heading back down for the movie, American Hustler, Sunday night.

This is actually a good time to talk about the amount of stairs in the downtown/Old Town, Romantic Zone, Conchas Chinas area of Puerto Vallarta.  They are EVERYWHERE!!!  Due to the topography in this area (lots of BIG hills), which we love, and the fact that people walk most everywhere, there are stairs, stairs, and more stairs.  And, they aren't always built with consistency either.  Some are higher, lower, wider, narrower than the consistent stairs in the States or Canada.  The stairs we climb going to and from our Spanish classes just kill me!  They are higher and with my shorter legs, it just puts me through the wringer.  I will NOT miss them!!  You do get a great workout though.

So today starts another week of classes and movies every night.  I'll catch up with you all next weekend.  And, the countdown to move is on!!

Thanks for keeping up with us and following our journey as it unfolds .....
Posted by Tricia Lyman at 3:32 PM
Email ThisBlogThis!Share to TwitterShare to FacebookShare to Pinterest