The End of a Great Week!

In my haste to gush about the gift presented to Mike in Sarchi last Wednesday, I forgot to toot my own horn about being published for the very first time in my life! Mike's gift was way more wonderful for me but I'm pretty proud of my accomplishment, too.

I began a "conversation" on line with Dan Chambers, who lives in Heredia, Costa Rica. As the conversation progressed he revealed that he was the owner/publisher of CostaRicanTimes.com, an online Gringo newspaper.  He then asked if I would write an article for the paper comparing Costa Rica to Panama.  I was hesitant because I've never written anything except school reports, business reports, and my blog. Well, I told him I'd give it a try.

On Monday, I sat down and just had the same mindset as if I was writing my blog. Before I knew it, my article was written. Mike did the honors of editing it for me before I submitted it for Dan's review. Well, I got the good news late Monday afternoon while having drinks overlooking the countryside of Grecia.  Not a word changed by Dan!! Voila, on Tuesday morning, I was one of three featured articles.  Who knows where this will lead!! http://www.costaricantimes.com/a-retirees-decision-costa-rica-or-panama/13344

Thursday we spent the day doing some grocery shopping and working on reservations for our US trip. That's a job in and of itself!!

Friday morning was my appointment back at the clinic for my breast 3D sonogram. The clinic is a busy place, it's new, and they are striving to be a one stop one shopping experience for all medical, dental, and eye care needs, they are courteous, have English speaking staff and doctors, and are very reasonably priced.

Rather than the wait that they had me prepared for, I got right in and met the most professional technician! He was in his late 50s and spoke immaculate English, as he'd been trained in Houston.  The exam took only about 15 minutes but we chatted so much, I was in there for almost 45 minutes. He gave me the results immediately indicating that all is well with the girls for the present time.  Total for the exam, detailed pictures, and the great conversation was only $50!!

On our way back to the center of town, we passed a small storefront that was for a Chiropractor, hair stylist and a masseuse. Now that's entrepreneurship!!  We were feeling our backs were out of sorts due to our bed not being quite the comfort level we need, so we made back to back appointments for 4pm at a cost of $20/ea. The plan was to go next door to Saprissa for the evening and watch the Costa Rica vs. USA World Cup qualifying soccer game.

We arrived back and while Mike was having his massage, I decided to get my hair trimmed - $6.  I'd been toying with the idea for a while but had always chickened out because of the language barrier. But, am I glad I did!! She did exactly as I had asked and now my hair feels much healthier again.  I'm enjoying being able to pull my hair back and get it off my neck.

The massages were of a different type - not sure what it was called - but all I know is that it was the nicest beating I've ever had!!  LOL  This was truly not a massage where you closed your eyes and drifted off into your own thoughts. My thoughts were how deep was her elbow going to go before she came out the other side of me!  Oh, and I only had her do "medium" touch.  Mike had the "hard" touch and loved it!!  Me - not so much.

We had a fabulous evening at the bar - Saprissa!!  Visited with Ed and Dana, single men expats who've been here quite awhile from different parts of the US. If anyone was watching the game back in the states, you'd know that Denver was getting a blizzard that just continued to get worse as the game progressed. Despite the weather, we were quite impressed with all the players keeping their balance in the snow. The US ended up winning 1-0.  We did keep as much of a low profile as possible since we were the only 4 Gringos in the place.  Not to worry, we had met some locals who we watched most of the game with while talking and getting to know each other so we were cool!! LOL

Yesterday we decided to make our first trip into San Jose for the main purpose of going to the Orchid Exhibit.  By bus it was only about an hour and $2/ea. Unfortunately, I didn't go very well prepared for the location. We got off the bus a little early but that turned out to be a good thing. While stopping at a local soda to check our map and do some research, the owner offered to help us. I finally found the information and he showed us on the map where we needed to go.

It looked to about 12 city blocks further, so we decided to walk rather than take another bus. We are glad we did because we walked right into the El Centro shopping district that is about 8 blocks long and 3 blocks wide and is ALL pedestrian!! A very bustling, vibrant area with street vendors, any type of shop you could imagine, street performers, locals with tons of children, and lots of tourists, as well. 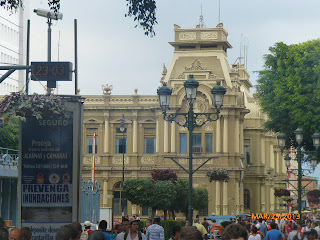 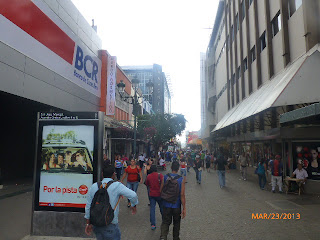 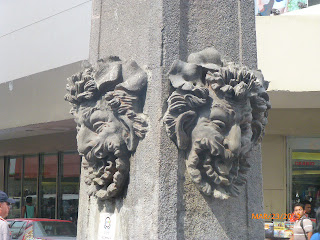 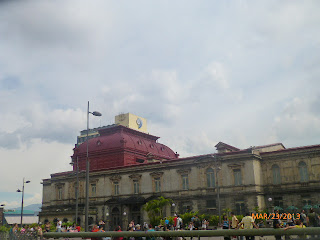 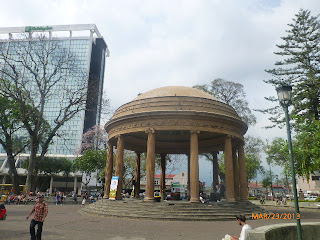 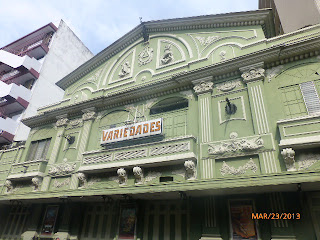 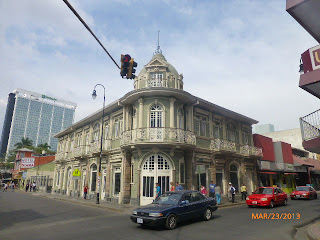 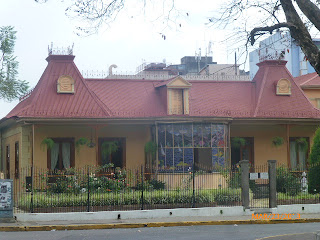 After walking through the shopping district, we headed over a couple of blocks and found park after park as we made our way up hill toward Parque Nacional - National Park. At the very end and just a couple more blocks was the Antigua Aduana -  Old Customs House. What a beautiful renovation was done to this building and we were delighted with the show!! Pictures, pictures and more pictures but they don't really do justice to the beauty and presentation of this exhibit!! 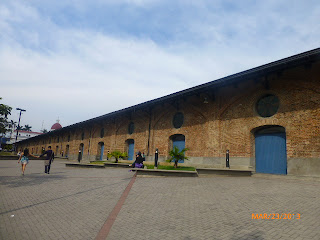 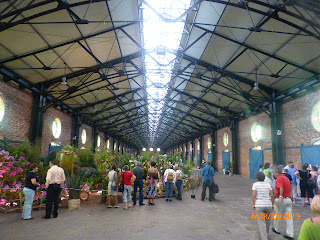 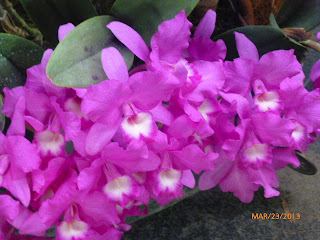 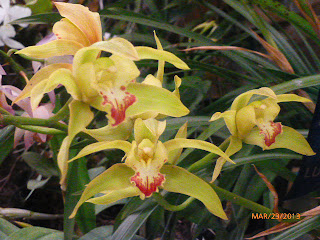 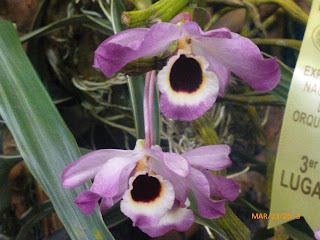 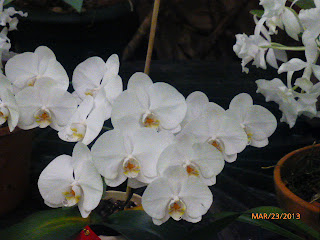 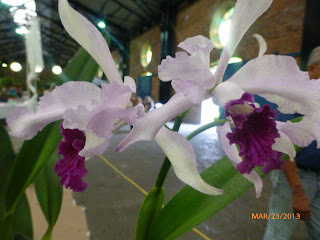 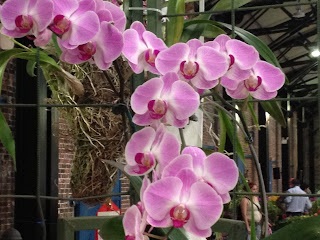 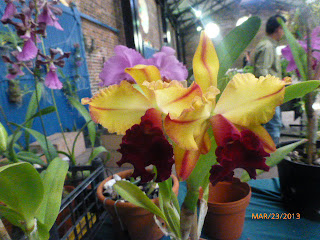 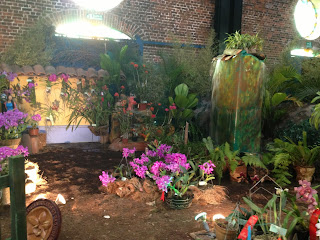 After leaving the Exhibit, we walked slowly back through the park and decided it was time to find a nice place to have dinner and a drink before heading back by bus.  El Patio on a balcony overlooking the main promenade is where we parked our bodies for a bit. A great place to people watch!! 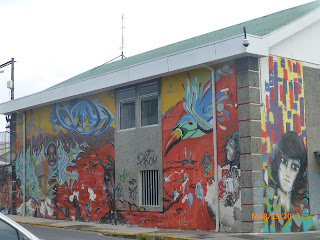 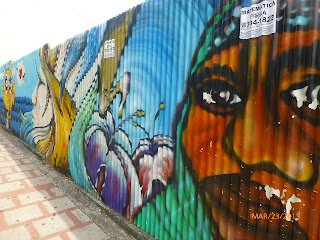 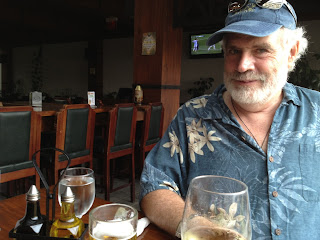 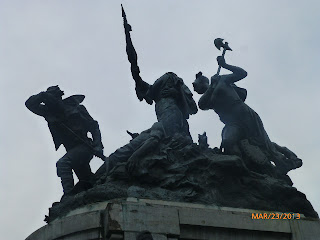 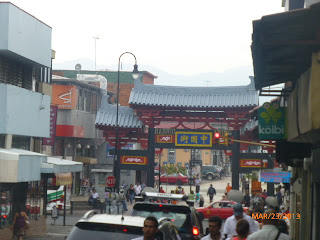 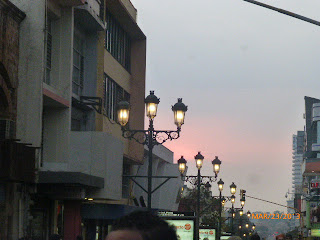 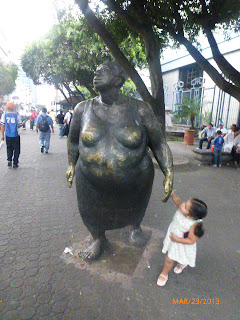 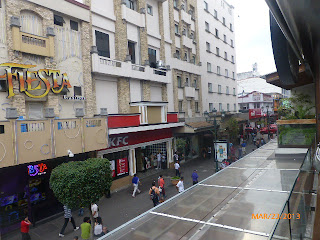 We made the bus before dark and took short naps on our way back to Grecia.  A good, satisfying day in the BIG, BIG city of San Jose!!

Today is Palm Sunday and marks the beginning of Semana Santa - Easter Week. This is a week of holiday for many.  It's also a very serious time for being non sinners here, so the country made a law to not allow the sale of alcohol from Thursday through Sunday except in places like the beach where they depend on tourist business.  Grecia is not reliant on tourists so we know we'd better stock up on beer and wine. Don't know if they'll be serving liquor in any of our favorite restaurants. Another new adventure!!

Tomorrow is supposed to be our last day at the dentist, if all goes well, for both of us. Mike will have 2 new front teeth and I will have a new upper partial. The only reason we should have to go back is for minor adjustments. Fingers crossed!

We also want to fill our week by venturing out further by bus to a few more sites including a trip back into San Jose to see more museums. Stay tuned!!

Congrats on being published.
Bunny

happy you got published....you are a 'people's writer & i always look forward to reading your blog (& any future publications:). i would love to see a pic of your new hair do. i do not like my hair on my neck....too warm here for that & my hair grows too slowly to wear it up in a clip. have fun kids! i wish for you only the finest life in foreign countries has to offer. luv to you both. xo s&k

Your article about Costa Rica is wonderful. We both enjoyed it tremendously. CR looks beautiful. Glad you are enjoying your journey, we are looking forward to ours.
Suzi and Bob