A Week of Vacation!!! LOL

Now that's it's March, I guess I can say that February was our Hump Month on this first 6 months out of the US.  With 2 months left to go in Central America, we are truly beginning to quantify what we're really looking for! It's really a terrific feeling!!!

So that said, how can you have a week of "vacation" when you're on vacation???!!! Well, I guess, we don't really see ourselves as "on vacation" although we're having one hell of a GREAT time!!  If we were on vacation, we wouldn't seek out the permanent Gringo residents everywhere we go, we wouldn't attend Gringo meetings to find out what's going on in the community, we wouldn't sit "home" and read or surf the web for a whole day, and we certainly wouldn't cook as much as we have!!

BUT, this past week, we DID take a vacation!! On Monday we took the bus from San Luis to Tamarindo.  That entailed 4 different bus rides - San Luis to Tilaran, Tilaran to Cañas, Cañas to Liberia, Liberia to Tamarindo. We left home on the 8:15am bus and arrived in Tamarindo at 1:45pm. It was like clock work with only minutes between busses and in Liberia, we literally got off, bought our ticket and had to quickly get to our bus that was ready to leave.

I dressed in a sun dress being the ever optimistic person that I am because it was rainy, windy, and chilly when we left. Waiting for the bus both in San Luis and Tilaran I got quite the looks!! However, about half way down the mountain toward Cañas, the sun came out and you could feel the warm sun. And, by the time we got to Liberia, it was quite warm! Everyone here says it's sooo hot but I/we loved every moment!! And, I could feel myself "breathe" again when I saw the ocean and the beaches!!

Our friends, Donna & Randy, were there within minutes of our arriving and joined us for a well deserved cold drink at the Aqua Disco/Bar on the patio overlooking the beach. We decided there because it was the closest place to where we got off the bus and we needed the baños bad by then!! LOL 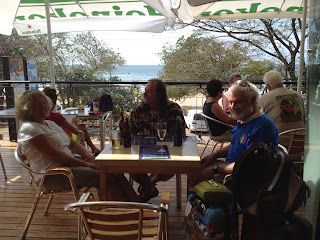 Then we mozied on down to Witch's Rock, which is the sister bar/restaurant/hotel to our own Volcano Brewing Company up here in Tilaran. A delicious lunch and a tremendous view of the beach and ocean overlooking their Surf School.  A nice leisurely afternoon and I felt like the calgon had taken me away!! 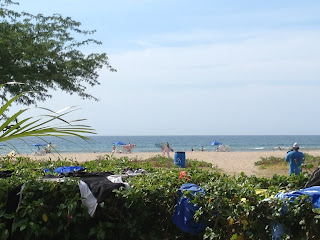 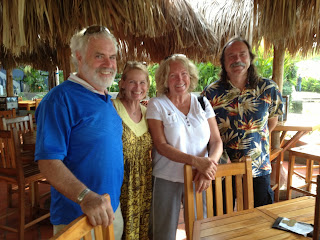 Tamarindo is truly a resort tourist town that reminds me of any tourist town on the beach with its bars, restaurants, various hotels and resorts, shops of trinkets, but mostly surf boards and swimsuits.  What we found interesting though is that the road system is quite good in Costa Rica and their continuing to improve them everywhere but in Tamarindo the roads were dirt, gravel and broken up, pot holed, asphalt, which I guess lent itself to the off the beaten path feel.  Loved it!!

Donna & Randy have a beautiful one level 2br/2ba condo in a small Tico town called Matapalo. It's on a dead end and there are currently 10 units with plans for 15 more, I think.  They will wrap around the beautiful pool and patio area.  This is where the 4 of us sat Monday night drinking wine and having a grand ol' time visiting!!

BUT, that was after going down to Playa Grande for the most beautiful sunset we've ever seen!! And, that's saying allot with all the ones we've seen on beaches and oceans around the world!! It took a half hour for the sun to set and the sky kept changing colors everywhere you looked. A nice cloud layer was the secret to the stunning show!! 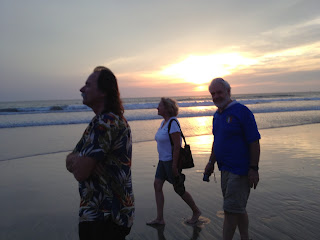 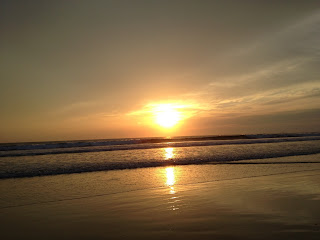 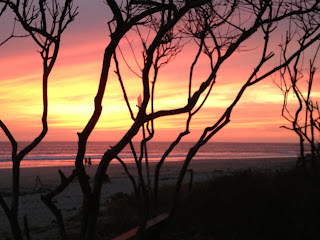 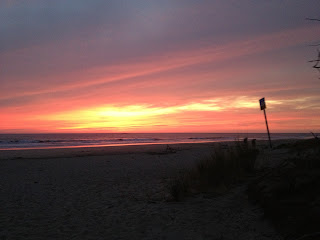 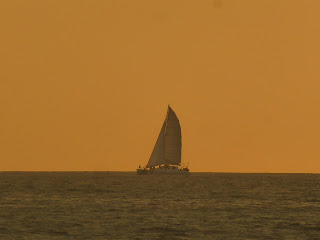 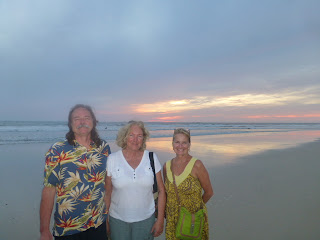 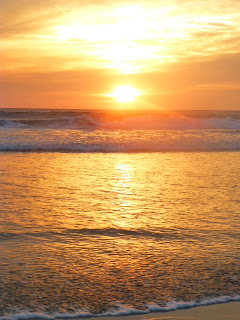 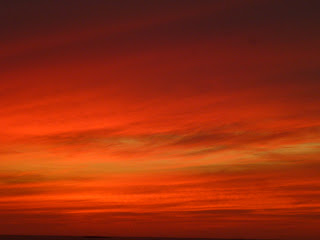 Tuesday after a leisurely morning of sitting on the front porch drinking coffee or orange juice, reading our email, books, and catching up on news, off we went to this most wonderful beach called Playa Pirates that legend has it a treasure is buried on the Haystack at this beach. It's a beautiful quiet beach in a cove area.  We walked, enjoyed the tide pools, watched the Pelicans, and found gorgeous sea shells that were washing up on the beach with each wave. 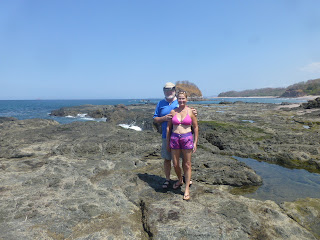 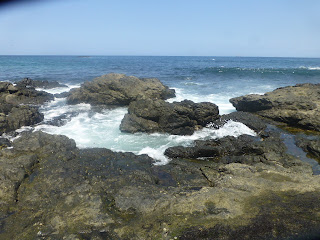 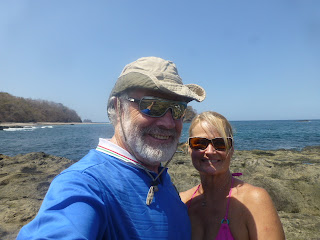 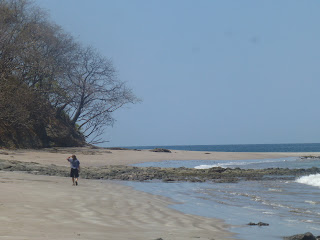 Back to the condo for a late lunch and a refreshing swim in the pool - ah!! By 5pm we were all put back together and ready to head out to the Monkey Bar high up on a hill overlooking Playa Flamingo. A stunning view but couldn't see the sunset BUT the full moon rise was exquisite!! What a fantastic beautiful earth we live on!! 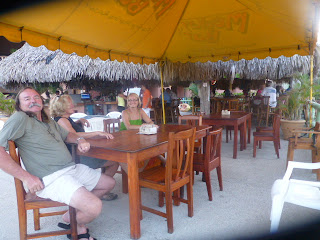 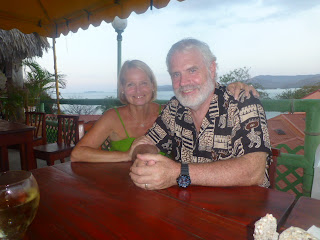 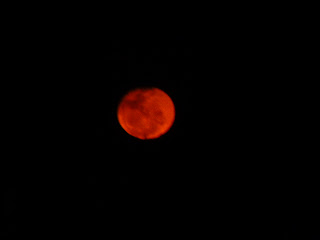 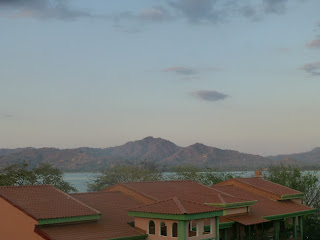 From there back to a quaint Argentinian restaurant called Café del Pueblo where we were joyously greeted by the owner!! She knew Donna & Randy and was thrilled that we were there but mostly she went on and on about how business had really been good after having some rough patches with the economy. The food was luscious and would highly recommend it if you're down that way!

Wednesday morning was again spent leisurely while we all quietly woke up.  Since Randy had booked us on a catamaran snorkel sunset cruise, we got to be extra lazy!! By noon we were off to Tamarindo where we were launching from.  An intimate crowd of about 50 set off after everyone was tendered over to the boat and settled in. An open bar was a sure sign that everyone was going to have a good time or, if they didn't, it was their own fault!! LOL

We cruised for an hour or so up the coast and lo and behold ended up at the same beach of Playa Pirates!!  Interesting to see it from the sea. You could now see all of the homes dotted all over the hillsides. Beautiful!

Sorry can't get any photos to upload for this segment. :(

After an hour or so of snorkeling by Randy, Donna, & Mike, which wasn't easy because of the current, and a light lunch of BBQ chicken, chips, fruit and chocolate chip cookies (not good), we headed back toward town but not before we saw Manta Rays in multiples jumping out of the sea and flying!!!  In all of our times out on the ocean all over the world, we've never seen this before!! It was like they were hopscotching across the ocean!! With white/silver under linings, they glistened when in the air!!  We also saw a huge "school" of rays swim in front of and around the boat. So cool!!

Thursday brought another leisure morning! It's awesome when your hosts like the same type of morning routine!!  By late morning, Randy, Mike & I set out to Playa Penca, which means leaf of a cactus. This is a beautiful beach that is almost end of the road and undiscovered.  Here they have kayaks and paddle boarding. I really wanted to try the boarding but decided to stick to the beach. Mike & Randy went out in a double kayak but because Mike isn't very flexible and the position you have to put your body in didn't work for Mike, they came back pretty quickly.  Randy then went back out in a single. 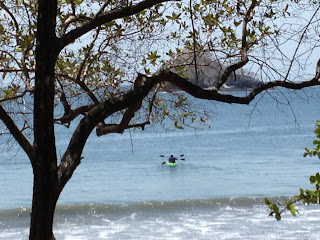 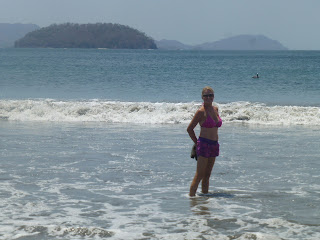 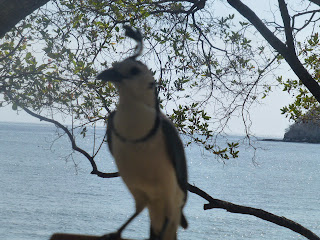 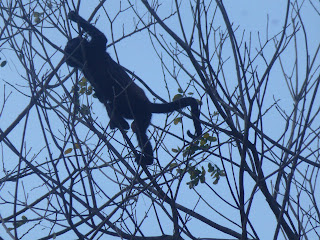 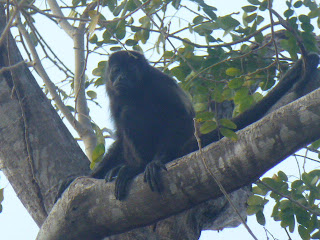 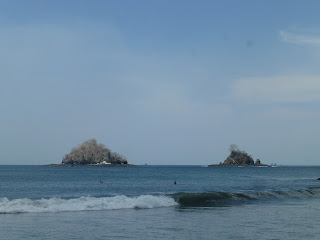 I joined Mike out in the ocean with the waves crashing in.  I got hit with a big one and realized too late that my new prescription sunglasses had gotten swept away!! I was and am really bummed about that because I waited so long to get them and really liked them. Oh well, we'll now find out about the cost of new ones down here.  I'm going to wait until we get to Grecia the middle of this week.

Then when I was washing my feet at the beach side shower, I got stung by what I think was a small black fury bee. This is a real issue for me since I'm highly allergic!! My foot started to turn red and swell but I put Benadryl stick and some "jungle juice" that is a special concoction that we bought in Boquete, Panama from a guy who said it would cure EVERYTHING that stings and bites including scorpions.  Well, it did seem to work and the swelling stopped about half way up my calf.  It's just now itching like crazy!!

At lunch we were greeted by this awesome looking bird but soon found out that not only is he noisy, he's also very obstinate and BOLD!!! He started out in a close by tree, then went to the chair, and then right in front of us on the table waiting for food! Fun to watch the first time but it would get old real quick. Picture above.

Upon leaving, we noticed about 5 adult spider monkeys, many with babies on their backs and one teenager trying to figure it all out how to go from tree to tree with little to grab onto.  Very entertaining!!  Pictures above.

A final evening out with dinner at El Huerto, a wonderful wood fired oven pizza and Mediterranean food with excellent wine choices!! Yum, Yum!! Then off to Tamarindo to find the Three Amigos for music and drinks on the beach at Le Beach Club! Fabulous trio who play 50's & 60's music. A wonderful time!!

Randy & Donna offered to drive us back on Friday, which we graciously accepted. Although still dressed for beach weather, it started to mist and rain again half way up the mountain toward Tilaran.  By 5pm it was down right raining and blowing! We hunkered in with our books and hit the bed a bit earlier last night.

Yesterday was a lazy day because the weather didn't really cooperated either. We caught up with our neighbor, Ohgina, who we missed and wished she could have gone with us to the beach. We've invited her down to Grecia and hope she'll come see us there.  Last night we had a horrible wind storm, rain and very chilly temps come through so I didn't sleep well with all the wind noise going on.

Today we're off to the feria (farmer's market) with Ohgina and then a walk up to La Reserva, a reforestation project right here in San Luis, for a walkabout to see the monkeys and sloughs. Even though it's still really windy and some rain creeps in and out, it should be fun.

Pura Vida until next time mi Amigos!!
Posted by Tricia Lyman at 9:05 AM
Email ThisBlogThis!Share to TwitterShare to FacebookShare to Pinterest
Labels: Costa Rica