As I had posted earlier, there's been a horrendous storm system over the Caribbean and Western parts of the country. We had a beautiful break on Tuesday but it was back on Wednesday and it's pouring again. My heart goes out to those who lost their lives while trying to save others and to all who have lost everything in this flooding and raging river area.

I'm still trying to come to grips with how bad Sandy was in the NE US while we were there. So much devastation!!

Yesterday afternoon we set off to Caldera with Jim, our host, to deliver his metal door that needed repairs by Kelvin Schartz, a Kansas expat.  We got to know Kelvin while he was doing some work on our casita the first week we were here.  He had invited us down to go to the Hot Springs and see his place.

Kelvin raves that he has died and gone to heaven here in the Boquete area. Caldera is not in the valley but is about 1,000' lower in elevation so it's drier and warmer, which means a bit more humidity.  His place is quite sweet and he gets to have his metal workshop right at his doorstep! A terrific commute to work!! 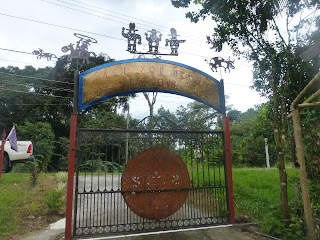 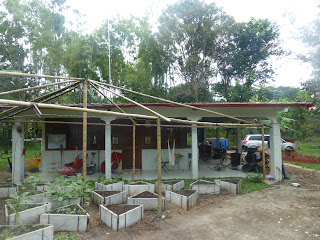 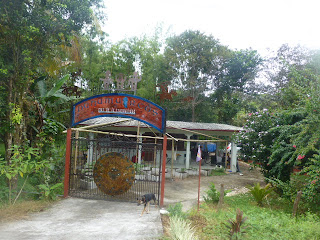 On the way to his place, Jim showed us a beautiful waterfall just off the side of the road. He told us that when the property next to the waterfall went up for sale, that they took down the sign telling everyone to watch out for snakes!! So our walk down the concrete steps to the river was with a bit of trepidation for me anyway. 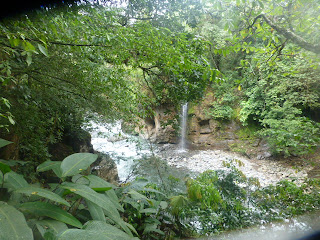 The town of Caldera isn't much with only about 500 residents, at best! A sweet 1750's church, one road basically going right through town with a few small shops, a very small Mercado (convenience store), 2 bars, and about 4 restaurants. The four of us went to Melissa's for lunch and had chicken & rice or port & rice and, as they say here, our other choices were rice & chicken and rice & pork. LOL 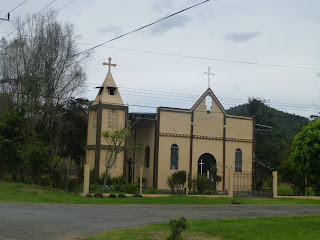 The lunch also had a side dish of spaghetti and a bowl of bean soup. That along with a drink each - the guys had beer, I had ginger ale - was a whopping $12 with tip!!  We splurged and picked up the bill. LOL

Jim went back home while the 3 of us went off to the hot springs way back in the jungle. Taking a gravel road off the main road, I had visions of our roads at "home". Kelvin couldn't believe that we dealt with rough gravel roads like this in the states! Surprise, as much as things change, they stay the same.

We crossed a canal about 2/3 of the way in but we don't really know what it's for. It surprised us as to where it was. Our conjecture is that it's for irrigation or hydro power further down the canal. We might never find out! 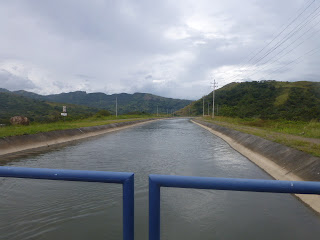 Crossing the river on quite the single lane suspension bridge - it felt and looked more like a swinging pedestrian bridge - we parked.  We parked because the "road" we needed to go up from there wasn't passable by cars and I would say most trucks would have a tough time. Definitely jeep or Hummer territory. 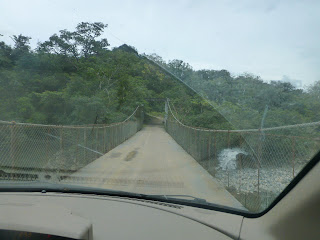 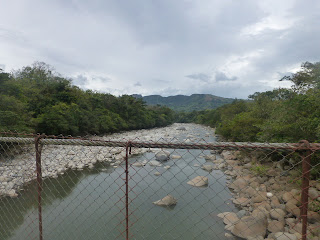 So off we walked up and up, turned left through an opening in the fence indicating horses certainly could make it. Actually, that's a point I haven't really spoken much about. Horses are used for transportation here quite regularly, especially in small villages such as this.

Following the path through a beautiful Teak treed area we were then thrust into the jungle.  However, there was quite a well worn path, as there are visitors to this sweet spot and it's owned and operated on private property.  Making our way through the wetlands and tree trunks following a beautiful creek and crossing over smaller tributaries on wood or log foot bridges, we came to the opening meadow where there was a simple home and farm animals. 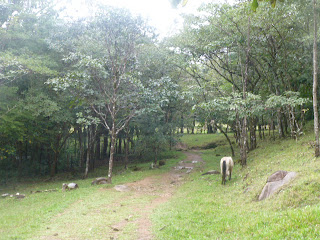 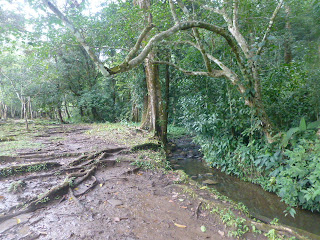 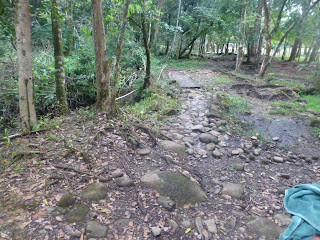 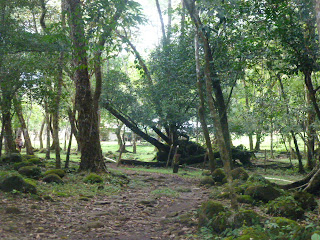 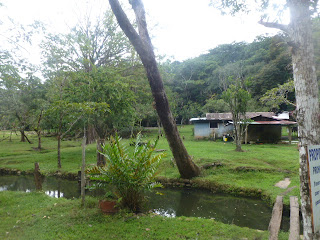 We were also on the lookout for what they call the "loco" monkey. The monkey had scared a young man to death a couple of days before when it jumped on his head and started pulling his hair. So Kelvin was carrying a rod just in case! Long story short - I never did see the monkey but Mike & Kelvin saw it on our return from the hot springs running after a goat! LOL 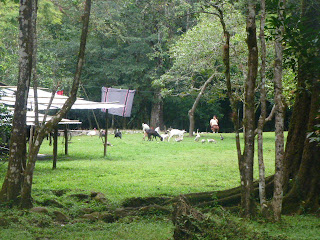 We were met by the owner of the property and he was such a nice, friendly guy. He was curious about where we were all from, how long we'd been here, etc. etc.  Mike had a grand old time conversing with him. And I must say that Mike's Spanish has become quite fluent again after three short weeks! In fact, the owner complimented Mike on how well he spoke.  I can now understand quite a bit but just can't talk back. I'm going to resolve that situation while in Pedasi.

We were offered two choices: the upper larger pool that was a shared public pool for $2/ea or we could go down a bit toward the river and have EXCLUSIVE use of a small pool and quick access and views of the beautiful river to dip in and cool off.  As long as we were there, no one else would be allowed down. Guess which one we chose??  Yup, the exclusive for $5/ea !

It was so worth it!!  We were down right in the jungle along the river with creatures calling all around us. The water was perfect temperature and we were able to relax till our hearts content!  We did see an animal that we're still not sure of what it was. It was much larger than a squirrel and black but not like anything we've seen. 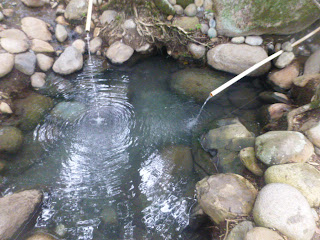 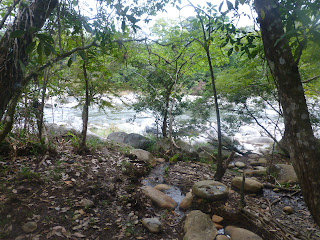 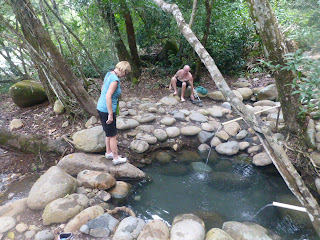 At about 4:30pm we decided it was time to head back.  Passing the pubic pool, there were quite a few people there from tour groups. So we were very glad we did what we did!

Kelvin took us up to the junction of the main highway so we could catch a bus back to Boquete and we bid our adieus. Our best to him and to his future. Might see you sometime next year or he says he might come see us in Ecuador. Until then, our friend!!

After waiting about a half hour and it now being dark, the bus came and we boarded. Instead of getting off closer to our place because I didn't want to walk up the roads without sidewalks especially the way they drive here, we took the bus all the way back to town. My ulterior motive was to have a nice glass of wine and Mike a beer at Baru before taking a taxi back home. It was a good plan and we got to kick back and observe the comings and goings in the bar/restaurant.  Since there is a hostel right next door, many travelers from all over the world patronize Baru.

Today we're trying get our act together - wash, pack, I colored my hair, and we're having Rick up for dinner so we can use up some remaining food before we leave tomorrow. As I had commented in an earlier blog, I had to choose a color that wasn't quite the same as what I usually use and the product was a bit different even though the same - Loreal - that I used in the states.

I was able to read the directions enough to comfortably know what I was doing even though packaging was a bit different.  After drying my hair, it was definitely a different color! But, I like it!! It's not as golden blonde but what they call a "pearl blonde" and it is pearly and soft. So success! That's a biggy hurdle for me! At least it didn't turn orange or pink or purple!! LOL

So tomorrow we head out mid morning with Rick and head south and east along the Pacific Coast to Las Lajas Beach Resort. We'll enjoy the beach, hopefully, and make our way to Pedasi by Saturday afternoon.  Rick is staying for 4 days and we're going to explore the area together.