This last week is one I care not to repeat!!  However, it was a very learning experience for both of us.

Mike had started having severe pain in his left shoulder the middle of last week and by the weekend, he was beyond being cordial.  So on Monday, first thing that morning, off we went by cab to Clinica FAE.  This clinic is staffed by Ecuadorian Army, Navy, & Air Force service members.

At check-in, a charge of $15 had to be paid upfront for the doctor's visit. After presenting his passport and the formal paperwork prepared, Mike had his blood pressure and pulse checked at a "station" in the waiting room. We then settled ourselves outside the office of the doctor in charge of Traumatología and waited our turn. 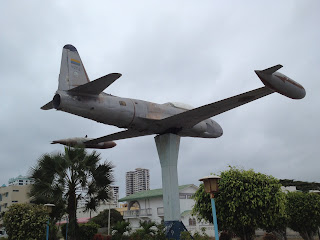 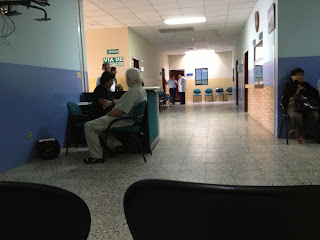 In less than an hour,  we were called into the exam room. There we met Dr. Luis Mendez, who was an Air Force officer. He spoke no English but Mike rose to the occasion and his Spanish was quite adequate. Dr. Mendez began al poking and squeezing Mike's shoulder, which produced many awful facial expressions by Mike.

Based on his general exam, an X Ray was ordered and we were escorted to the other end of the hall to where the lab and radiology was.  After a payment of $20 and a short wait, Mike was shown into the room.  In no time at all, out he came with his X Ray in hand to take back down the hall to Dr. Mendez.

Again, after a short wait, Dr. Mendez called us in and reviewed the film. It turns out it was inconclusive. He then gave Mike a prescription for 2 shots and 2 different medications. PLUS an order for an MRI. In order to get the prescriptions filled, we had to leave the clinic and take a bus to a pharmacy in town. The total cost was $42.50. Back up the hill to the clinic where we met the doctor and the lab technician gave Mike his first shot in the rump.

Off we went home to contact the 2 clinics in Guayaquil, which is the closest place they have an MRI. The new hospital in Santa Elena only has a CAT scan.  After contacting both clinics recommended, we found that one had quoted $412 and the other $330. We made the appointment for 2pm on Tuesday.

Up early on Tuesday because we had to go back to the local clinic first for Mike's 2nd shot. Then by bus down the hill to the bus station. The bus for Guayaquil was there getting ready to leave so we quickly bought our tickets ($3.30/ea) and hopped on the bus for our 3 hour ride.

As we were making our way through the crowded streets of Guayaquil to get to the bus terminal, our bus was stopped for a "paperwork" check by the police.  No problem for us but one passenger was asked to get off and go through a bit more checking. After about 5 minutes, the passenger came back onto the bus and off we went.

I must say that the main bus terminal in Guayaquil rivals the one in Panama City. It's huge and is also a shopping mall.  People everywhere!!

Out we went to catch a cab and off we zipped through more traffic and into the interior of the city where we'd never been before. We knew it wasn't far from the river and was south of where we had stayed our first night in Ecuador. And, sure enough, we were dropped off right at the Emergency entrance. About a 15 minute ride for $5.

At check-in, Mike was told that his appointment wasn't until 4pm. After some discussion all in Spanish, they asked us to come back at 3pm. Since it was already 1:45pm, we went looking for a place to eat.  Our best option turned out to be Pizza Hut where we actually had a nice sit down meal with a waiter taking our order.  We spent the rest of our time getting color copies made of our passports to carry instead of always having our original passports. Should have been doing this the whole time but never got around to it.

About 3:15pm Mike got called in for the MRI and I read my book. In less than an hour, Mike was back and we had to wait in another area until they gave him his film results to take back to Salinas for the doctor.

We caught a cab and off we went back to the bus terminal.  I had been given info on how to find the right ticket booth and then where to go up on the 3rd floor to find the bus. Our timing was perfect. The bus was due to leave about 10 minutes after we got our tickets.  Again, like clockwork.

One nice thing along the way back was we finally got to see a sunset before heading back to the cloud cover on the peninsula.  A long day, indeed!!

When we got home, we found out our internet was out. Not a good thing here as it can take a horrendous amount of time to get things fixed,

Wednesday morning I had been invited to the Salinas women's Coffee Klatch, which is held 2x a month at different places.  Quite the group of women!!  And, a good time had with meeting new ladies and seeing many I had already met.  I found out that my Spanish is actually much better than I thought or let's just say, others haven't advanced as far as I have.  Feeling pretty good about how much I actually do know!

We were quite anxious all day on Wednesday for the internet to come back on since we were waiting for the final MRI written results by email.  Those didn't come in until 4:30pm and at least I have internet on my phone - Mike doesn't.

Off we went to celebrate what seemed to be good news after reading the report.  Bursitis/tendinitis!! Yeah, no surgery required!!  Our first time at Hostal Aqui - Will's Place.  There we met a new couple in town, Mike & Beverly, who were checking town out just like us along with Will, the owner. Hitting it off quite well, we talked and got to know each other. 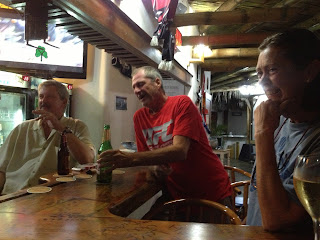 Since someone needed to be at home in case the telephone/internet technician showed up, Mike went to the clinic Thursday morning while stayed behind and read.  Sure enough, our interpretation of the results were correct.  The doctor ordered physical therapy every day of the business week until Mike has to go back to the doctor in 15 days.

I immediately sent out a request to all of my fb "local" ladies and got a response almost immediately with a name and phone number of a good PT. Mike called and could get in immediately, so off he went by cab to Libertad.  $15/hr and much improved after only one visit. His pain had finally subsided except for when he pushed it too far and that's a marked improvement!!

The internet "guys" finally got here late Thursday afternoon just as we had given up and were on our way out to Will's to go check email and do some "surfing".  We would not have been happy campers if we had missed them - but we didn't, so all was good in our world again.

Finally, the sun came out enough to actually have a sunset here in Salinas. Mike did a great job as always capturing the event on camera! 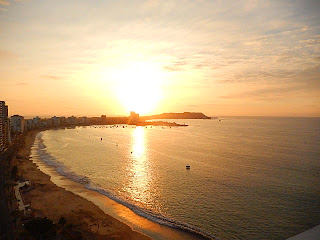 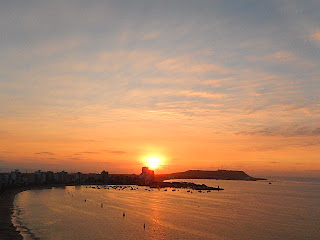 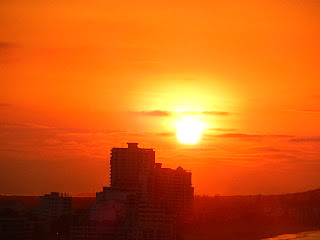 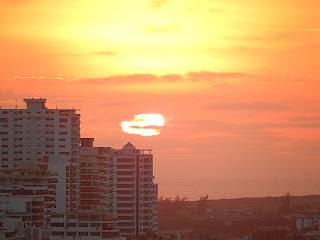 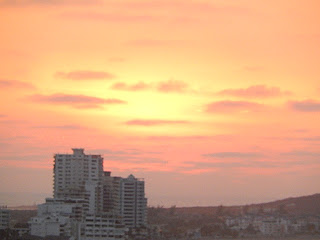 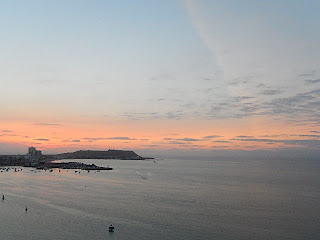 Friday morning Mike went off to therapy again and did our grocery shopping on the way back.  He greeted me at the door with a beautiful bouquet of a dozen red roses - ONLY $2.69!! Ecuador's wonderful commodity to the world!  Not having a vase, we used an empty water jug. Hey, it works!

That evening we attended the grand opening of a friend's new bar/restaurant - Smokin' BBQ, on the malecon. Only the bar opened but a great start for them. A fabulous group of people and a good time had by all!

We finally made it into the hot tub on the rooftop yesterday.  Nice and relaxing with a beautiful view of the city and ocean. Then off to Ralph's English restaurant for authentic fish & chips for Mike and I had beef brisket.  OMG - to die for!!! 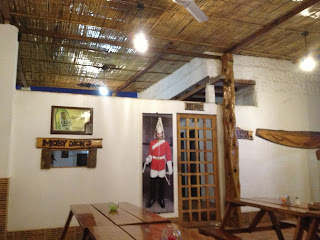 OBSERVATIONS: We have been very pleased with the level of care and cost of the health care system here. We have been totally enjoying our experiences with other Ecuadorians who have made us feel very comfortable and welcome. The Expat community is delightful! Very outgoing and willing to share and make you feel right at home.

However, our observations cost wise have been that things are not any less expensive here than they were in Panama or Costa Rica for the way WE live.  Gas here is much cheaper at $1.48/gal vs. $3.88 in Panama and $5.50 in Costa Rica. Wine is way more here than the others but beer is about the same as Panama. Rent about the same.

We're hoping that this next week we can begin to explore a bit further out up the coast. Whale watching on Wednesday with the "group" and more evenings spent with libation and good friends! And, Mike will continue with his PT.

Posted by Tricia Lyman at 3:57 PM
Email ThisBlogThis!Share to TwitterShare to FacebookShare to Pinterest