The week didn't pose any further medical issues for Mike. As was prescribed, he went every day to the physical therapist, Williams.  He's truly pleased with his progress and now has full motion range back with no pain.  He'll go 3 more times this coming week and then back to the doctor on Thursday to see what he has to say.  Yippee!!  He's a much better person to live with when he's feeling good.

Monday and Tuesday were just normal hang out days here at the condo. As the sun didn't make an appearance either of those days, we didn't feel compelled to get out much. Reading, watching movies, and doing research for our 3 weeks up in the Andes was plenty to fill the day.

I posted pictures of the parade celebrating the Whale Watching Season July - September of the magnificent hump back whales.  So in keeping with the spirit, Mike & I joined a large group of our fellow expats to go see them for ourselves.

As we gathered on the Malecón, I was thrilled to meet many more of my Facebook friends, even Vickie Capers had come down from Cuenca to visit! A few of the ladies bought beautifully colored star fish from a sidewalk vendor for $5 for 2. Exquisite! 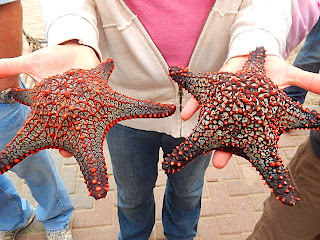 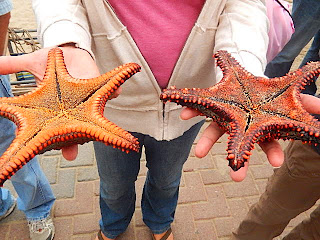 Once the launches arrived to take us out to the boat, Mike & I found ourselves on the first launch.  Our boat driver pulled on the rope to start the engine and the handle broke right off so he had to use the anchor to pull us back into shore.  Mike & I then found ourselves in a very small dingy that was being rowed with an oar. 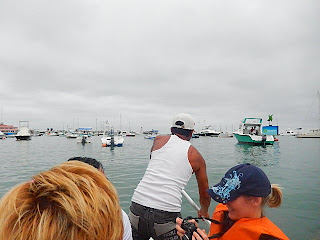 Upon reaching the tour boat, a much larger motored launch (like we were on originally) reached there at the same time.  Mike shouted at me to "watch out"!! I turned around and there was the big boat coming right at me and would have run right over us causing goodness knows what kind of calamity, but I was able to put up my hands and push us out of the way in time to avoid further issues. To say the least, I was a bit shaken up with the start of this tour!!

Fortunately, from there the tour became a great success!!  Once out about a couple of miles from shore, the whales began to show themselves. A great show with some rolling and rolling over, up and out of the water, and several huge breaches and big splashes.  Unfortunately, it's very difficult to get good pictures so these will just have to do.  Again, the day was overcast but at least it was a bit warmer and the wind had died down. 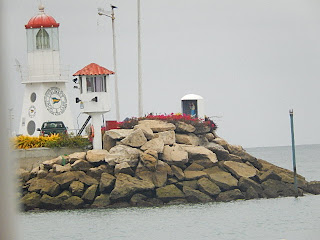 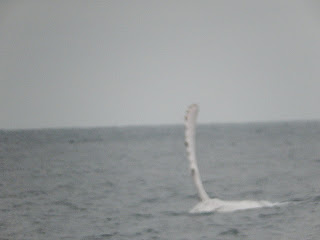 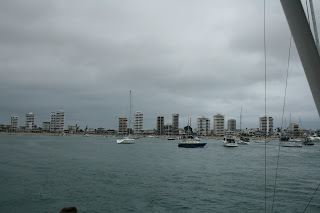 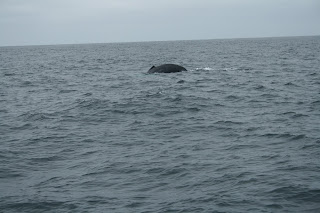 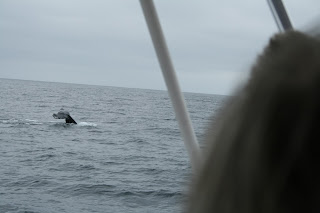 A great after party at our hosts place, Edwin & Andrea Salinas. Thank you both!!  A very fun time! 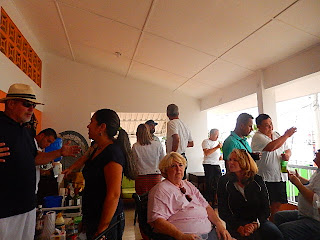 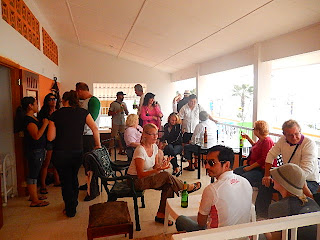 Thursday was more of the same of staying at home and working on making our plans and reservations for our trip up the hill.  It's truly time consuming looking at each hotel or hostel website, comparing where they are in the respect location and making the final decision that will determine if you're going to be comfortable or not.

One of our biggest dilemmas right now is that we plan on spending several days in Baños but because the currently very active volcano Tungurahua keeps exploding, we don't know whether the town will be open or closed.  Currently, they have it closed.  So booking a place that's non refundable and then not being able to get there presents a real scheduling and budgetary problem.  We'll figure it out though, I know.

Yesterday, the sun decided to come out in full force for the whole day arriving about 10:30am!!!  So up on the roof I went while Mike was at therapy.  That's where he found me and after having a nice lunch of freshly made chicken salad, we spent a bit of time just enjoying the warmth of the sun.  As we are really close to the equator, I decided to come in a bit earlier than I would normally.  Good thing, as I could feel that I was just on the edge of getting fried. And, I don't normally burn, I just get darker. But, oh it felt so good!!  Our dispositions perked right up!

Last night we were supposed to go listen to live guitar music and meet up with friends but, unfortunately, the musicians weren't able to make it in from Guayaquil.  Looks like they are hoping to make it next weekend. So we just went an hung out at the hostel where our friends are staying, Will's Place, and talked the night away.

Mike & I are not breakfast eaters so on weekends we usually have a wonderful egg brunch about 11am.  Today we went down to Smokin', our friend's new restaurant/bar right on the Malecón, where our other friend, Mike Beasley, was the guest chef for breakfasts today and tomorrow.  We had the most scrumptious omelets and the best coffee I've had since arriving in Ecuador!! Love this place for morning, noon, or night festivities!! 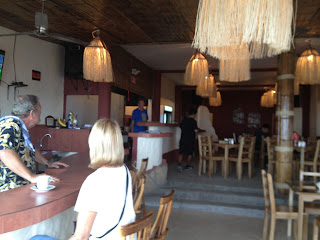 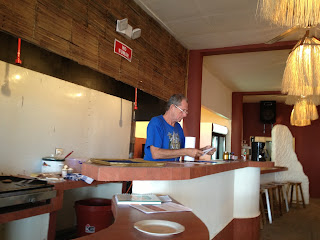 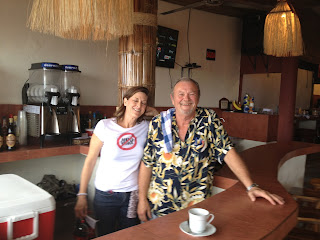 While there, we looked up and saw a huge line of small little pongas out on the horizon all decorated with balloons and flags.  They were sailing towards us then went to Chipipe beach and then made their way to La Libertad.  It is apparently St. Rose Day, which is the patron saint of the fisherman.  There seems to be some sort of celebration every weekend and it's fun to watch!  Oh, AND....President Correa is in town!! We haven't seen him but this is his favorite place to visit in Ecuador. 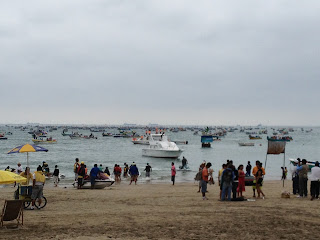 Tomorrow we will be heading up the coast to explore the small fishing villages and surfing towns of Montanita, where the world surfing championships were held this year.  We hired a private driver for a full day 9-6pm for $50 to be our tour guide. Better than renting a car.

And, so the journey continues to unfold...
Posted by Tricia Lyman at 2:48 PM
Email ThisBlogThis!Share to TwitterShare to FacebookShare to Pinterest